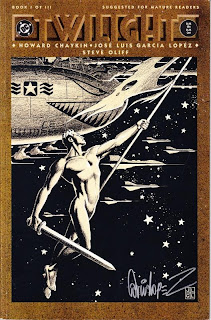 The Baltimore Comic-con took place a little over a week ago.  And Dan and Matt and I set up in Artists Alley with our wares – copies of Warrior27, Mainelining, and Reading Watchmen, among a few other things.  So, how did it go? 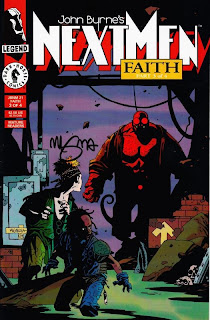 First – the older I get, the more that fact becomes obvious during these 12-hour drives Dan and I endure to attend these conventions.  (when you live in Maine, going anywhere means you have to drive for a while, but there’s nowhere you can’t get to within five hours, so twelve can come off as a bit ridiculous).  But we love these shows, so it isn’t that big a sacrifice.  I just wish we didn’t have to do the overnight drive immediately after the show ends (and, to be fair, the traffic isn’t as bad when you’re traveling at night, so we got home at 4:30, eleven and a half hours after departing, rather than the standard twelve from Maryland to the heart of Maine). 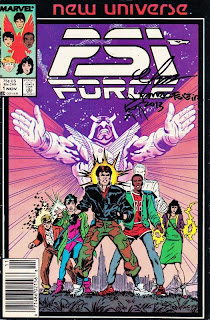 Second – sales were soft, to say the least.  I saw a lot of dead areas in Artists Alley when I got a chance to trawl down the aisles.  One of those happened to be directly in front of our table.  We sold a few things, made back a little less than half our table fee, but we didn’t do nearly as well as we have, in the past, at the Small Press Expo.  I talked to a number of other creators who had similar things to say.  A couple of really talented artists I know, who have a larger profile than myself and Dan and Matt, were not happy with their sales.  They weren’t going to be able to cover costs, and one of these guys had a book published through a small press publisher earlier this year.  Odd. 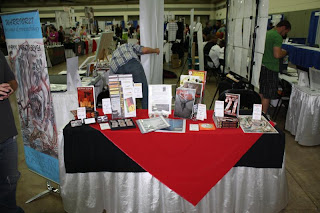 But here’s the thing.  As “indy-friendly” as Baltimore is said to be – and I can’t outright deny that, as I know a couple of other guys in Artists Alley who had good shows – it really is a show for fans of Big-2 comics and their creators.  With retailers at the front of the hall offering longboxes full of Marvel and DC comics, along with books from other, smaller publishers, and writers and artists such as Mark Waid, Chris Samnee, Amanda Conner, Jose Luis Garcia-Lopez, Jim Starlin, Frank Cho, Mike Mignola, Art & Franco, Ramona Fradon, Justin Jordan, Rob Venditti, Sean Murphy, et al. available to meet with their fans, this show is heavily geared toward the mainstream comic fan.  And with as much of the market share as is taken up by those two publishers, it makes sense.  That means it’s even harder for the “little guy” to succeed at this show, unless they’re pushing zombies, which does not seem to be a fad that has yet to run out of steam. 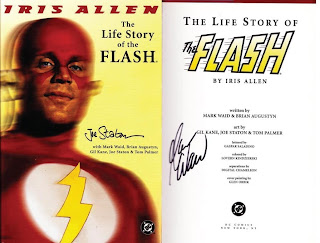 The nice thing about doing these shows with Dan, and Matt this year, is the fact that none of us is tied to the table.  We can give each other a breather and allow for opportunities to stretch our legs, maybe do some shopping, peruse the tables of other Artists Alley exhibitors, and do the fan service thing.   Dan and Matt did some of the former, with Dan managing to fill in some more of the dwindling holes in his Batman collection and Matt picking up some cool prints from an artist just down the line from us, while I focused on the latter.  And, to be honest, I was surprised at how easy it was to get to meet some of these creators.  Other than one major exception, which I’ll get to in the next installment, the longest line I got in was for Mark Waid, and that one went very quickly. 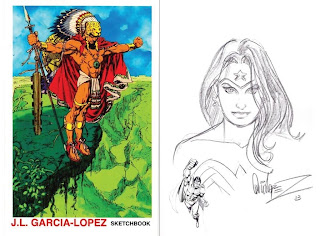 Other creators with whom I spoke included J.M. DeMatteis, Keith Giffen, and Kevin Maguire (I got all three to sign my original Justice League collection), Mark Buckingham, who signed two issues from his Miracleman run with Neil Gaiman, Mike Mignola (who only had three people in line when I got there o_O seriously?), Justin Jordan, Tradd Moore, and Rob Venditti (who’s been a great guy to talk to at conventions through the years and super-supportive of my writing), Mark Nelson (who drew an Alien in my collection of the original Dark Horse series), Greg Larocque, and Jose Luis Garcia-Lopez, who drew a beautiful Wonder Woman sketch in the front of the sketchbook I purchased from him.  I managed to get some of my favorite books signed and was able to thank the creators for what they’ve done, while also getting the opportunity to speak with some newer creators about writing and comics and various other topics.  All the writers and artists, with a glaring exception I will keep to myself, were very approachable and came across as genuinely pleased to meet their fans.  So, from the point of view of a fan, this show was definitely a success. 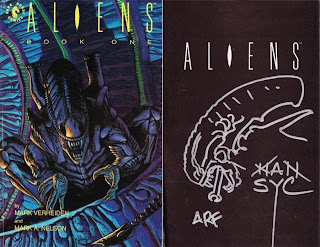 But how would I judge it from the point of view of a writer working to “break in,” as it were?  That’s for next time. 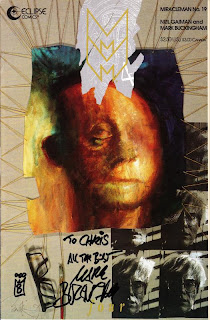 (You can read more from Chris at Warrior 27.)

Posted by In The Mouth Of Dorkness at 6:15 PM