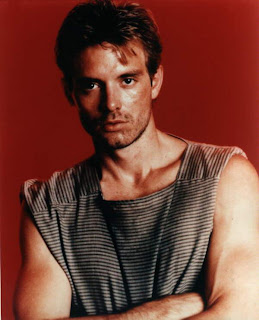 "You're So Cool."
As a budding adolescent, Michael Biehn was the King of Cool.  Arnold Schwarzenegger was the Action Hero to end all Action Heroes, but it was Michael Biehn that I wanted to become as an adult.  The Terminator, Aliens, Navy Seals--that trilogy felt like real machismo to the wistful child growing up in front of the television. 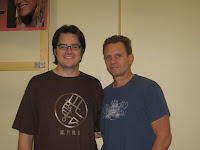 Horrorfind 2008, such an awkward photo.  50 Bucks Please
Biehn was sorta non-existent in the 90s.  Solid supporting roles in Tombstone, Jade, The Rock and let's not forget the short-lived Magnificent Seven television show.  But the man never quite made it to the level of fame that this idol worshiper was expecting, or hoping.  Recently, he delivered a great turn in the Planet Terror segment of Grindhouse and it now looks like he's written & directed a movie.  Watch the trailer:


Hmmmmm...okay.  Doesn't look that great.  But I love that "What Are You Yelling At Me For!" kick Biehn does at the halfway point and if his buttkicker role is large enough then this film might be somewhat enjoyable.  Fingers crossed as always.  If you want to see a NSFW version click on over to IGN. 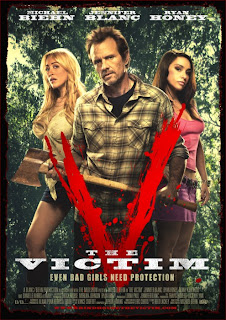