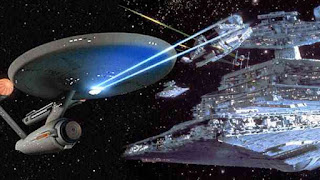 While I’ve written about Star Trek and to a lesser degree Star Wars before, I thought I’d revisit it for a few reasons. First, the recent success of Star Wars: The Force Awakens, a movie that I thought was OK and much better than the previous three films, but not all that great. Second, the recent announcement that a Star Trek TV series is in development. And third, the aftermath of Star Trek Into Darkness (worst Trek film ever?) and the build-up to Star Trek Beyond.

I read an article (see here) that compared Star Trek and Star Wars a while ago, which bothered me. In it, the author postulated that the major difference between the two was that Star Wars was about fighting the Man, and Star Trek was about being the Man. I disagree. Getting past various categorization squabbles (science fiction vs. science fantasy, blah, blah, blah), there are some pretty big differences that separate the two. I’d argue the target audience, for one, is different. Also, the nature of the two is profoundly different. One started as a weekly TV series in the 1960s, while the other started as a blockbuster theatrical release in the 1970s. That difference alone is profound. And when I think of Star Trek at its best, I think of the original series and some of The Next Generation. I don’t tend to think of the films, which from Wrath of Khan on (with the exception of Star Trek IV) are very much more in the Star Wars, summer blockbuster, action film camp.

Star Wars is generally marketed for children. It’s enjoyable for adults, but rarely deals with particularly deep themes or complicated issues. It often relies on gross caricature when presenting characters, so that everyone is on the same page. Good guys are obviously good guys. Bad guys are obviously bad guys. Typically looking at them is all you need to do in order to know what sort of person they are. And the general theme is about as simple as they come, and roots back at least to Zoroastrianism and the duality that would help to form three of today’s major religions (Christianity, Islam, and Judaism). It is the conflict between Good and Evil.

While still frequently marketed toward younger viewers, Star Trek often presents more complicated issues. There are absolutely ham-fisted attempts (see: most episodes actually written by Gene Roddenberry, for example), but there are occasionally subtle ones, too. With Star Trek, the viewer is frequently presented with a moral question. Unfortunately, as was the style of the day, they were then given the answer to that question. But the questions were often serious, sometimes deep questions of morality, philosophy, and meaning. The question wasn’t “do I submit to the horible forces of Evil?” but rather “is it right to do this evil thing for the greater good?” Or, “do I need to make peace with the evil within me in order to better the good?”

Star Wars never grew out of its simple nature. It remains a story of Good vs. Evil. Even as it distanced itself from its Flash Gordon, pulp roots, it moved deeper and deeper into a universe of constantly warring sides in a battle between ultimate Light and ultimate Dark. Villains rarely seem to have any motivation beyond cruelty and the hunger for power.

Star Trek has changed and evolved many times over the years. Unfortunately, more often than not, this seems to have moved it more in line with the Star Wars tradition. Though not going so much for the Good vs Evil line, it has frequently fallen into the trap Batman & Superman have, the “let’s make it darker” trap. Star Trek was a semi-Utopian setting...so let’s show how the Utopia of the Federation is actually corrupt and evil (Deep Space 9). Star Trek was about brave people who faced the unknown of space for the pure joy of it. So, let’s make the characters hate their jobs and be forced into it (Voyager). Star Trek was about big ideas and moral questions. So let’s make action movies that must be solved by the hero punching the villain (the theatrical films). And as time went on, folks behind Trek tried to make it more ‘sciencey’ by throwing in lots of buzzwords and technobabble which muddied the dialog and provided too many opportunities for technological deus ex machina rescues.

But when Star Trek was at its most Star Trek, it wasn’t about ‘being the Man.’ It was about being the best we could be, then striving to be better. Star Wars, for better or worse, was and is about Good vs Evil. Star Trek made young Matt think about what choices he might make, about what it was to be a good person. Star Wars made young Matt say, “AWESOME!” I loved both. And while Star Wars has lost a lot of its charm over the years, thanks to terrible prequel movies and some other issues; and later expansions of the Star Trek universe seem to have lost the thread; I still have fond memories of both. I just find myself going back to Star Trek, watching the original TV episodes, even popping in the original films (the first four, anyway), far more than I do with Star Wars. Star Wars doesn’t give me the same thrill it once did. Though I enjoy the heck out of the first two films. I’m a Science Fiction nerd, and I have a lot of room in my heart. But when it comes down to it, Star Trek at its best is better than Star Wars. There. I said it.

-Matthew J. Constantine
Posted by In The Mouth Of Dorkness at 10:09 AM No comments: 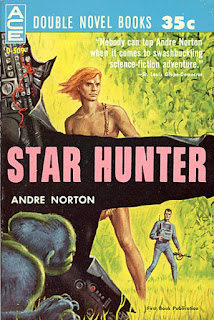 Fans of science fiction simply must read Andre Norton (Alice Mary Norton). She was one of the architects of the genre, writing a daunting number of books that stand alone Asimov, Herbert, and the rest. She creates visions of believable futures, peopled with multi-faceted characters. And she does it in just a hundred or two pages.

In Star Hunter, we’re introduced to Ras Hume, a safari guide and big game hunter who takes wealthy folk to specially selected game worlds. But he’s also running a con, getting the mob and a desperate orphan wrapped up with him. And when they stumble upon something unexpected, all kinds of trouble drops on their head.

When I’m reading Norton’s work from the 50s and 60s, I can’t help but think she was crafting a larger universe without every getting too strict about it. I often get the feeling that if you flew far enough in one direction or another, you’d find the characters from one of her other novels going through their particular set of struggles. If I were a better man, I’d assemble some kind of guide to her worlds; try to figure out which stories belong together. 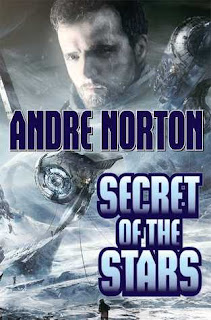 Posted by In The Mouth Of Dorkness at 6:07 PM No comments: