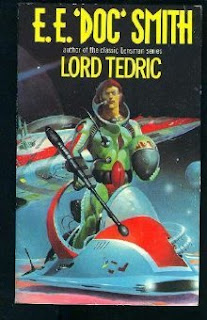 E.E. ‘Doc’ Smith is one of those authors I’ve always been aware of, but never really read. I know his Lensman series is one of the major inspirations for Star Wars, and kinda archetypal Space Opera. With Lord Tedric, he plays with time travel and alternate dimensions, as well as various bits of Science Fiction and Fantasy to tell the story of a man, made god.


Maybe I was just not tuned into this one, but I had a devil of a time paying attention. I never really connected with any of the characters or the plot. I feel like there was something interesting at the core, but the execution is lacking. I think there’s a humorous bent to the writing that I simply wasn’t catching. Like in-jokes you recognize but don’t understand.

This story would later be expanded into a novel and follow-up series by Gordon Eklund. It seems like it became much more of a science fiction-y type thing under Eklund. But this original novella drops its kinda crazy opening for a dull Medieval procedural about knights and kings talking in semi-Shakespearean language.


-Matthew J. Constantine
Posted by In The Mouth Of Dorkness at 6:09 PM No comments: 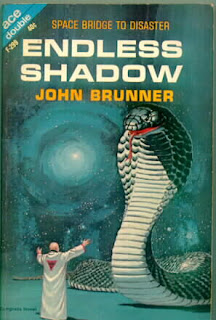 Somehow, being an avid science fiction reader for more than 30 years, I’ve managed to never read any John Brunner. I know I’ve bought some of his books over the years, but unless I’m forgetting a short story somewhere along the way, Endless Shadow is the first thing I’ve read by him.

As half of an Ace Double, Endless Shadow is a novella set in a future where Earth is building a network of transport gates to re-unite its scattered descendants on distant worlds. Two new worlds are about to be opened, one a stagnant matriarchy and the other a world of death obsessed cultists. Could one of these worlds bring down everything Earth has built?

While the Science Fiction concepts certainly feel like they come out of the Golden Age, this 1964 novel feels intensely modern in some ways. It’s a reminder that women and people of color were given much more to do in science fiction of this era. Not by every author, sure. But not infrequently. And it wasn’t uncommon for novels and novellas to be about philosophical ideas, which is where this books main thrust aims. Does death make life worth living? Is life worth anything? Where does one find meaning or a reason to go on? Heady stuff.

-Matthew J. Constantine
Posted by In The Mouth Of Dorkness at 10:12 AM No comments:

Book Review: The Rim of the Unknown 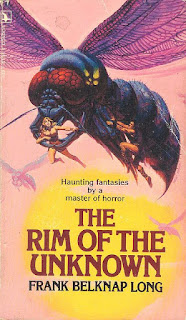 When I was a lad, and first getting into the works of H.P. Lovecraft and other weavers of weird tales, Frank Belknap Long’s name quickly entered my literary world. His story “The Hounds of Tindalos” was one of my favorites from the circle of Mythos writers I tapped into. Years of shopping at my favorite book store (Pro Libris on 3rd Street in Bangor, ME) netted me a lot of Lovecraft related books and collections by authors from that ever growing circle, including several by Long. Like so many of the books I hoarded, I never got around to reading them. Until now.

With “The Rim of the Unknown” I got a sampling of his work from the late 20s through the mid 50s. A few were clearly of a Lovecraftian bent, especially 1927’s “The Man with a Thousand Legs.” While others felt more like a Ray Bradbury pastiche, like “Fuzzy Head.”  Many of the stores featured the Atomic Age fear (of nuclear annihilation) and hope (of a new, superior breed of humanity) that so marked the mid 20th century Science Fiction. Several of the stories had the Twilight Zone style “twist” endings (“The Cottage,” I’m looking at you!). And there were several stories with that 50s assumption that space flight would just be a thing we did; no big deal.  He also wrote a lot about families and family dynamics.  This seemed a bit odd, considering he was not a family man.  He got married around the age of 60, but never had children.

My favorite stories were the ones that tended toward the weirder, more “big idea” Science Fiction side of the spectrum.  “The Trap” was has a very Twilight Zone feel to its plot and resolution.  But the core concept of the alien in it is something kind of special, and I think puts it firmly in the Lovecraft Mythos.  At the end of the volume there are three companion stories that I really, really enjoyed.  “The Great Cold,” “Green Glory,” and “The Last Men” were all written in the mid 30s, and all take place in an extremely distant future of the type envisioned in books like William Hope Hodgson’s “Night Land.”  So far into the future, the Earth is nearly unrecognizable, and what we consider the “natural order” has been disrupted. In this case, Humanity has fallen, to be ruled over by alien (not extraterrestrial) intelligences descended from what we once saw as lowley. Each story looks at Humans living under the yoke of millennia of controlled breeding and institutionalized servitude, and how a thread of what makes us who we are might survive.

The thing I probably most came away with from this anthology is that Frank Belknap Long was, perhaps, not a great writer.  He was creative.  He was certainly prolific.  But while I sit back and wonder why people aren’t reading Andre Norton, or Robert E. Howard, or some of the other really great talents of Weird, Fantasy, Science Fiction and Horror stories, I understand why Long may have fallen mostly into obscurity.  His prose is acceptable, without being especially artful or impressive.  Many of his tales have a very dated feel, not just in language, but in general concerns.  This might work more as a glimpse at the psychology of the day than as a compelling read.  Go read “The Hounds of Tindalos” (not in this volume), for sure.  It’s great.  Much of this...There’s a reason it’s forgotten.  But for fans of the weird tale, for folks into this kind of fiction, it’s worth a read.  You’ll find things to enjoy throughout. 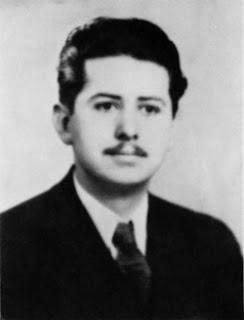 -Matthew J. Constantine
Posted by In The Mouth Of Dorkness at 6:27 AM No comments: 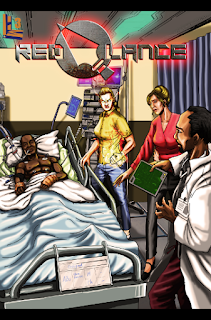 Issue 3 of Gary Bloom’s Red Lance comic series continues to put stresses on the team, as one member recovers in the hospital, another tries to suss out a recruit, and all the while Vycia continues to mentally manipulate the scientist turned costumed villain, Cataclysm.


I think I’ve figured out what it is that I don’t care for in the art from issue 2 and 3. It’s the prevalent use of digital effects, from the coloring to the manipulated photo backgrounds. As I said in my previous review, I don’t think there’s anything wrong with it. It’s just not my thing.


I’m curious to see where some of the various plotlines are headed. I’m especially interested in finding out what Vycia’s deal is. Why is she doing what she’s doing? What’s she planning?


Red Lance feels like a Silver Age comic series, run through a 90s filter, without picking up too much of that decade’s more unfortunate aspects. It’s also nice to see a diverse cast of characters, without tokenism. Check it out. And support independent voices in comics ( http://redlancecomic.com/index.html ).

-Matthew J. Constantine
Posted by In The Mouth Of Dorkness at 6:40 AM No comments: 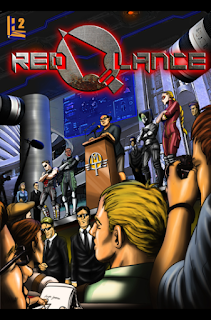 A few weeks ago, I reviewed the first issue of Red Lance, and independant comic written by Gary Bloom. The first issue introduced several characters and the beginnings of some ongoing conflict. The second issue clarifies the conflict, somewhat, by introducing another antagonist MedryTech, and hinting at some larger goings on.


The first thing you’ll notice about the second issue is that there’s been a change in artist. While the coloring is more vibrant and the panel work pretty good (good panel design/flow can be a challenge even in big publisher comics), I’m not as into the art in the second (and third) issue. I can’t even put my finger on why. There’s nothing ‘wrong’ with it; it’s simply not my thing. Hey, millions of people like the art of manga, and I don’t. So, take that for what it’s worth.


Other than a few places where the dialog is a touch clunky, this is a solid superhero comic. The characters are diverse, and I get the feeling the author has story arcs and motivations in mind for most if not all of them. I’m curious about the two reporters occasionally cut to. Are they going to murder each other on live TV at some point?


Check out Red Lance ( http://redlancecomic.com/index.html ). It’s always good to read new voices. And I always recommend trying out work from outside of Marvel and DC, where you’re not likely to get any fresh ideas or new takes on anything.


Matthew J. Constantine
Posted by In The Mouth Of Dorkness at 5:53 AM No comments: