The Passing of Leonard Nimoy 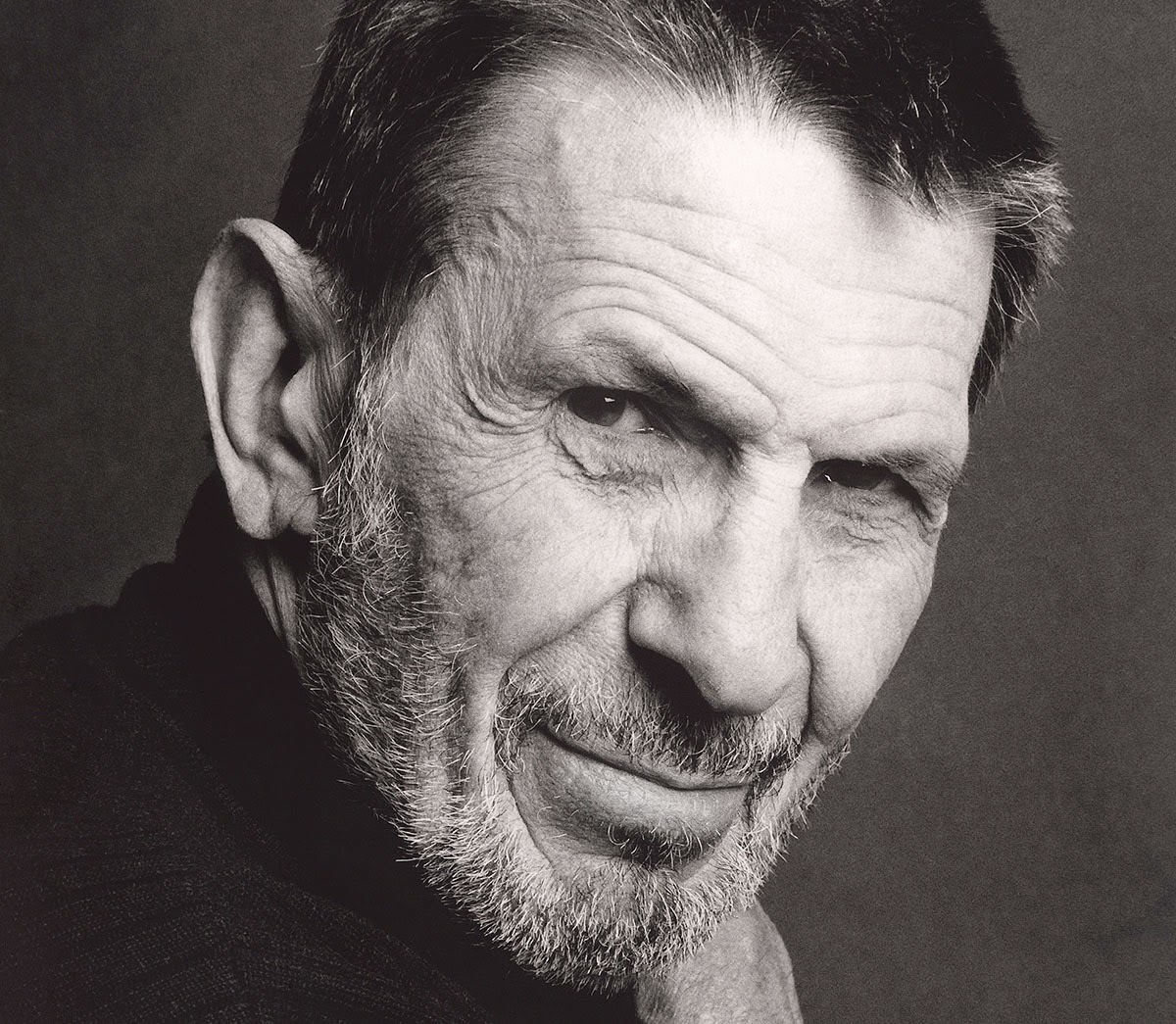 Though not surprised (he had been experiencing serious health issues for some time), I was still saddened to hear of the passing of Leonard Nimoy today, at the age of 83.  Watching Star Trek is among my earliest and fondest of memories.  The morality of the show was key to my development as a human, and Nimoy will always be a part of that.  He will be missed. 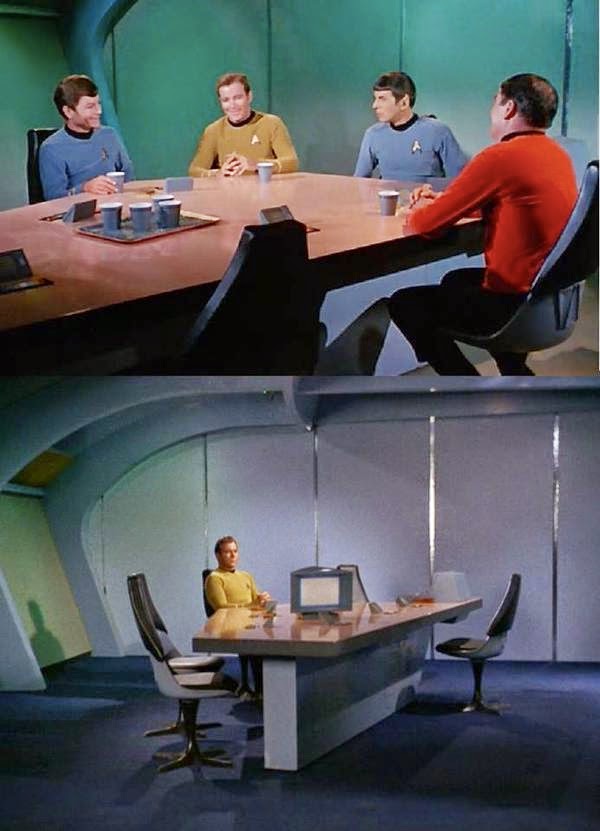 Posted by In The Mouth Of Dorkness at 4:20 PM No comments: 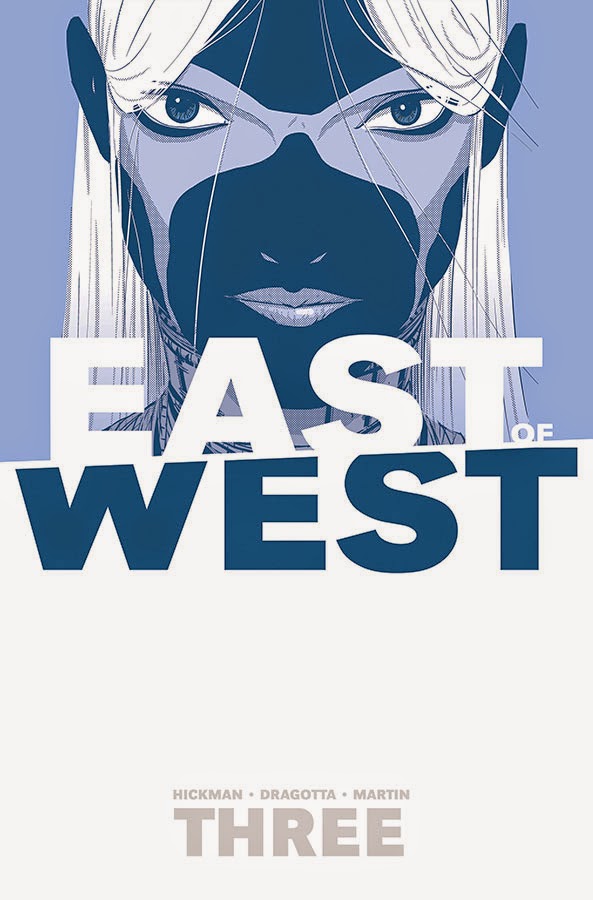 Xiaolian is no longer content to let events happen on their own.  As she and the other leaders of the new world try to navigate quickly shifting loyalties and dangers, Death continues the search for his child, the Three Horsemen are coming, and the Endless Nation is on the march.  War is coming, and things are about to get very hairy. 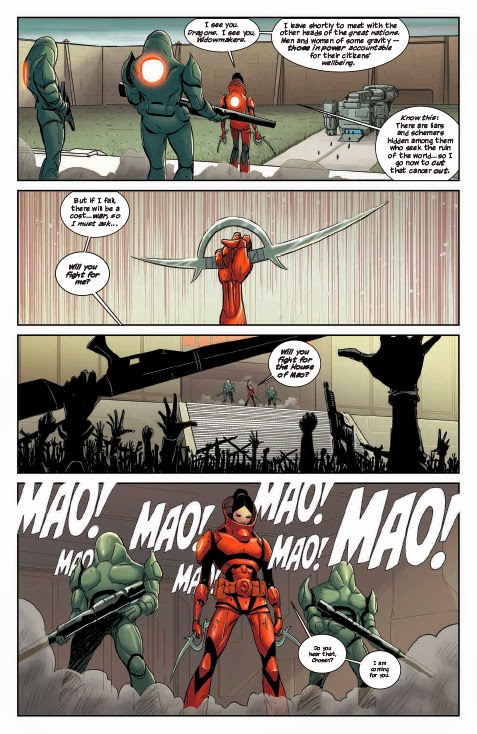 With volume three, it feels like most of the chess pieces are on the board, and the great game is in full swing.  Events happen fast, blood hits the floor, and Beast walks.  This is a story that barrels forward like a freight train.  It’s intensely readable, visually striking, and a visceral, gut punch of a tale.  An epic for the ages.  This is the kind of thing you feel lucky to discover and immediately want to rush right out and make all your friends read.  Well, this is the best way I can do that.  Read East of West.  It’s the business. 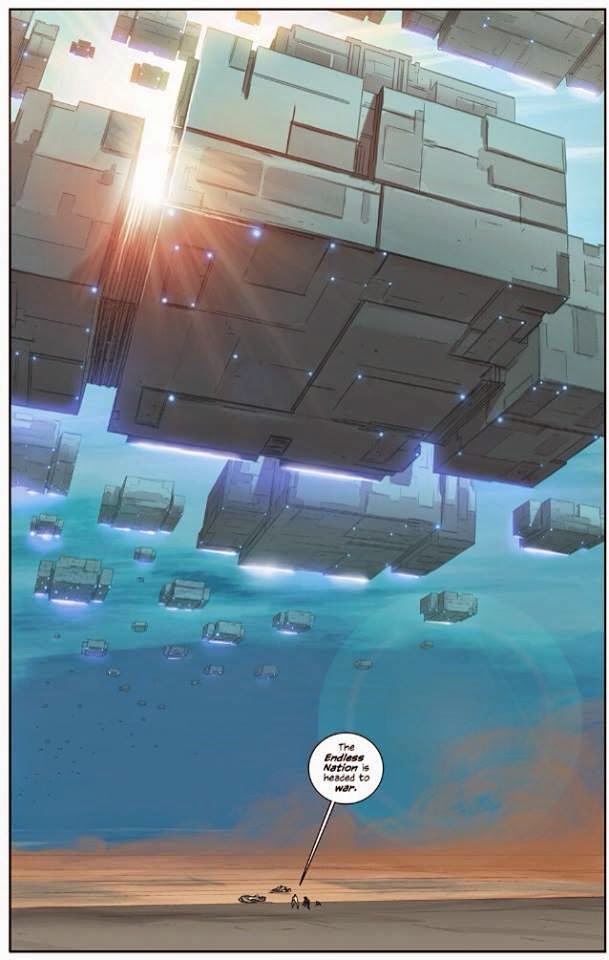 -Matthew J. Constantine
Posted by In The Mouth Of Dorkness at 4:47 PM No comments: 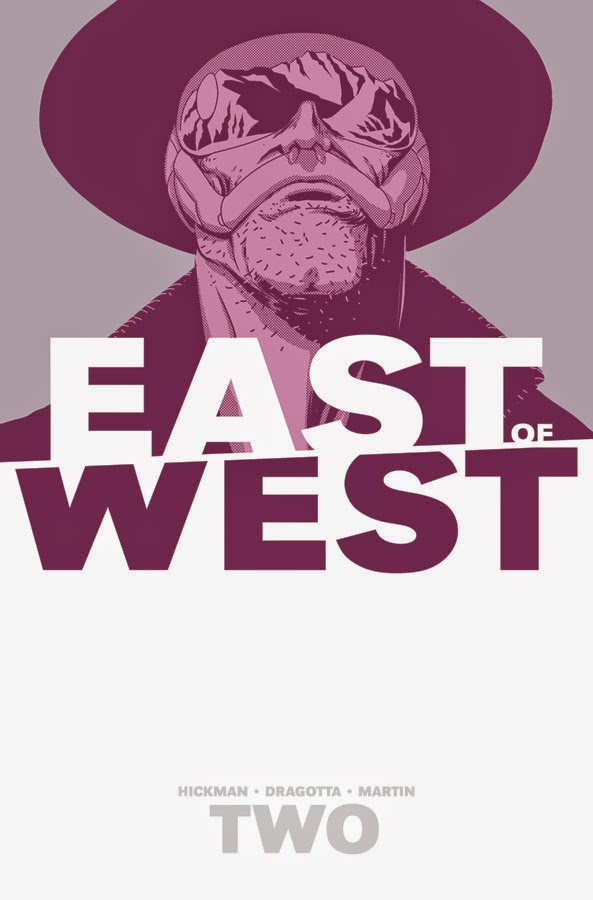 In the second volume of Jonathan Hickman’s alternate-Western/Sci-Fi operatic epic, more deadly troubles are revealed, more hell comes a knocking, and Death pays a price for a little info.  The politics of the weird world grow more and more strange, as nations build for the coming war.  All the while, Death’s kid sits, deep inside a cyber-dungeon, waiting for the time when he can rise and become an instrument of apocalypse. 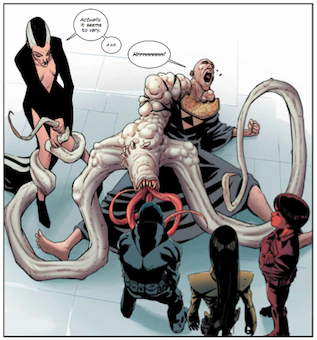 By this stage in the story, there are so many threads, so many characters.  It really does feel like a grand epic.  Not only is it big storytelling, writ on a huge, Western inspired canvas.  But it’s also high emotional drama about families, dynasties, rivalries, revenge, and zealotry. 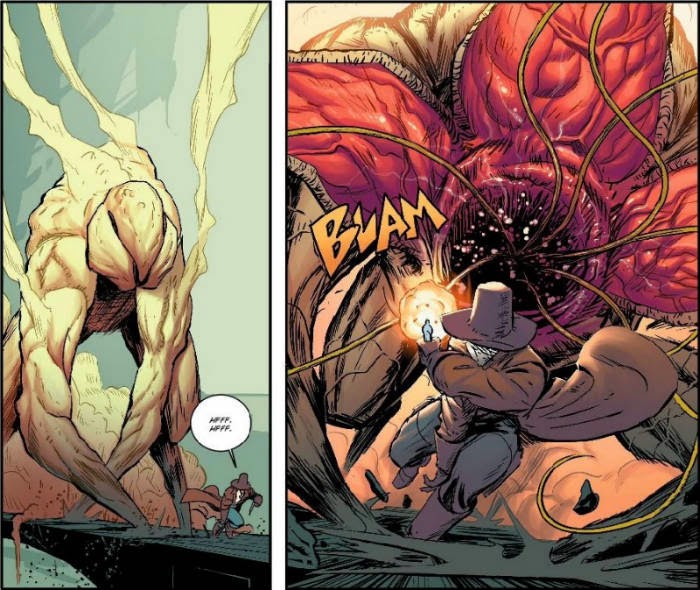 East of West revels in the format, telling a massive, cinematic, operatic story in lush color and stark imagery.  I can not wait to see how this tale develops.  If the ending can live up to the beginning, this should stand alongside other great epics with no shame.  It’s a must read, and another reminder that companies outside of the Big Two are producing some swell graphic literature. 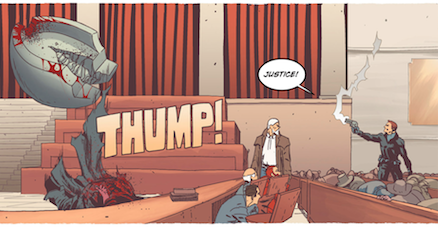 My review of volume 1 is here.

-Matthew J. Constantine
Posted by In The Mouth Of Dorkness at 4:38 PM No comments:

A Fistful of Over the Top Villains! 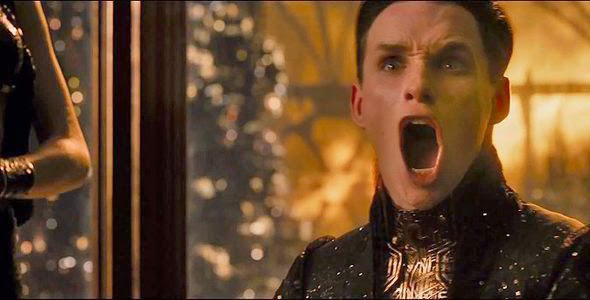 After watching Jupiter Ascending and Kingsman: The Secret Service, I want to take a look at some of Cinema’s best wacky, over the top, out there villains.  There are many, of course.  And I’m sure we all have some favorites.  I’ve been seeing some serious shade thrown at Eddie Redmayne’s particular performance in Jupiter Ascending, but I thought he was one of the best parts of the movie.  Anyway, here are my top five.

5.  Kasper Gutman (The Maltese Falcon):  A wonderfully erudite and civilized gentleman criminal, he chuckles and blubbers his way through a crime caper, attempting to orchestrate the great heist.  “I’ll tell you right out, I am a man who likes talking to a man who likes to talk.” 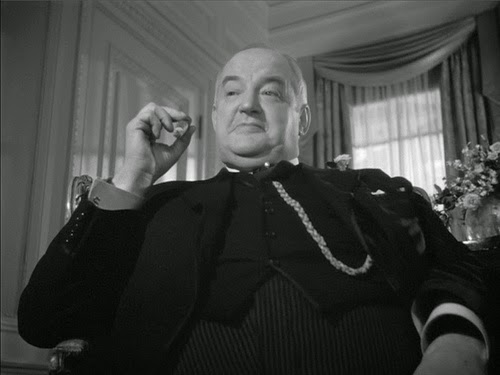 4.  Mugatu:  (Zoolander):  He invented the piano-key necktie.  What have you done?  This fashion forward madman will not let you bleeding hearts stop slave labor from making your clothing.

3.  Dominic Hoffo (Slaughter):  This sweaty, racist pig has had it up to here with rug-headed mob boss Mario.  And his day sure doesn’t get better when tough hombre Slaughter gets friendly with his buxom lady.  His fiery end is kind of amazing.  Maybe one of the most amazing things ever filmed.

2.  Sir August de Wynter (The Avengers):  A man should never be afraid to get wet.


1.  Jean-Babtiste Emanuel Zorg (The Fifth Element): The weirdly Southern business mogul and servant of evil, he doesn’t mind a little chocolate syrup dripping off his salad bowl hat.  And he knows how to deal with gun-hungry alien soldiers.

-Matthew J. Constantine
Posted by In The Mouth Of Dorkness at 3:28 PM No comments:

Known as "The Great Profile," John Barrymore was nearly as dashing as he was handsome, and was the star of a heck of a lot of great stuff.  See him in Grand Hotel! 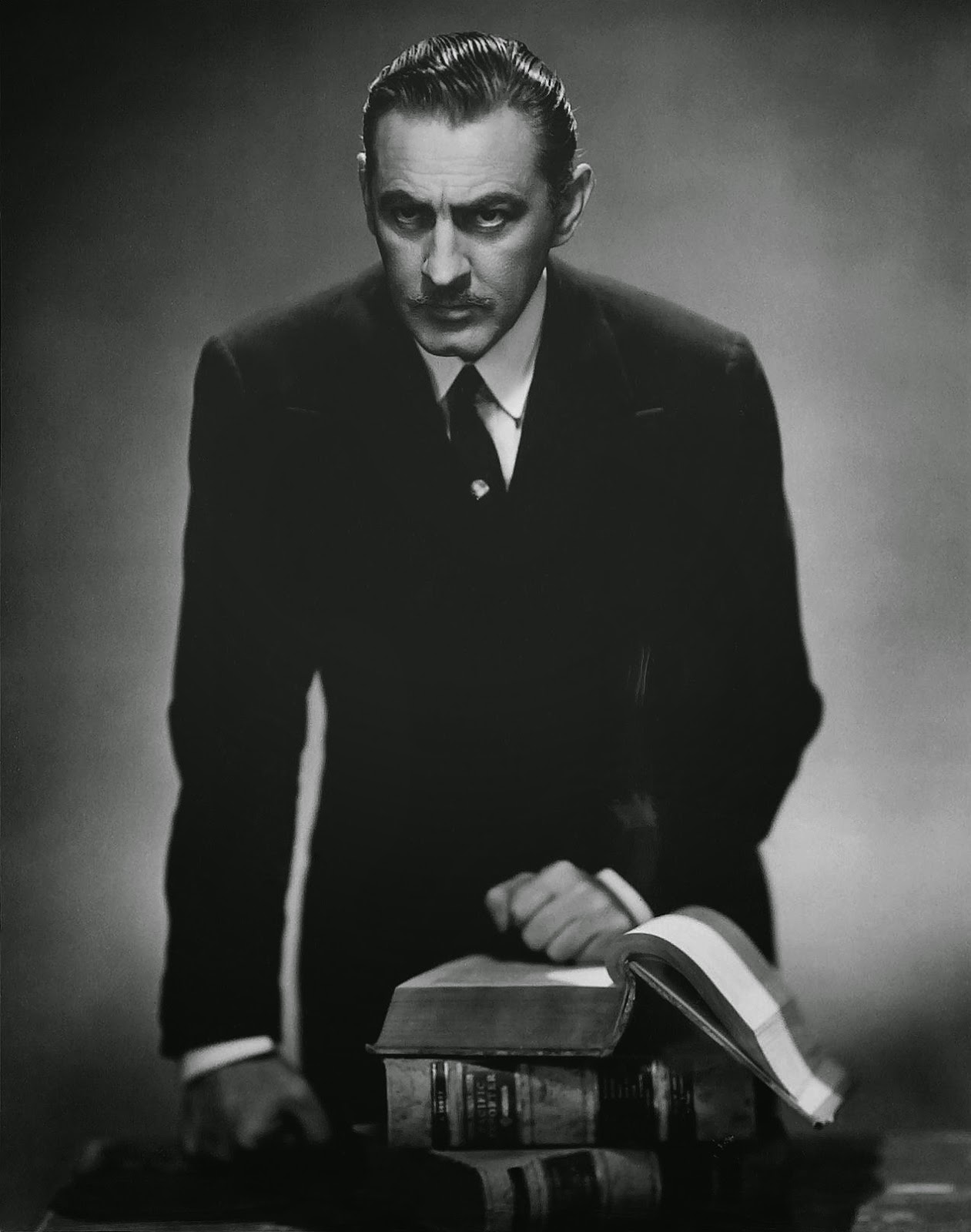 -Matt
Posted by In The Mouth Of Dorkness at 2:20 PM No comments: 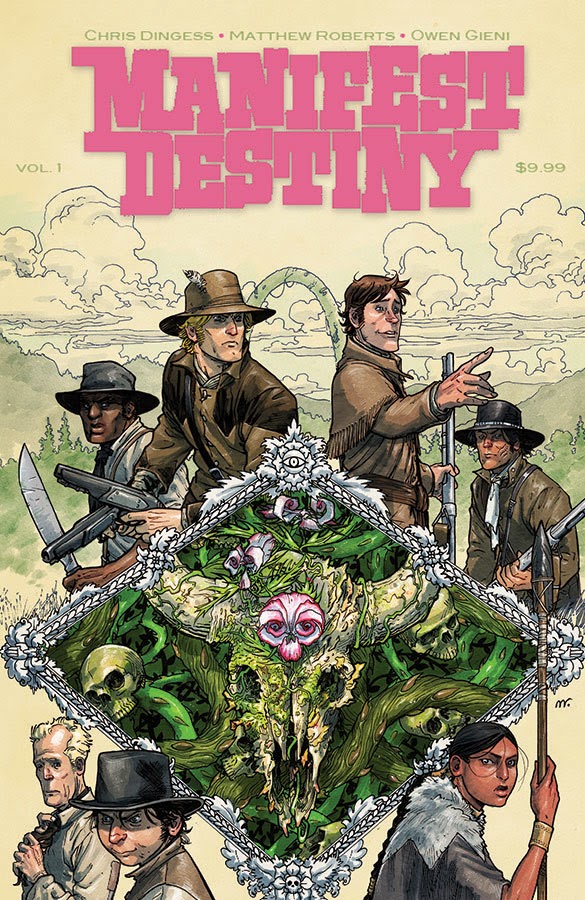 It’s 1804, and Lewis & Clark have been sent out into the wilderness to explore the Western lands so that future settlers can know what to expect.  Well, that’s the official story.  In truth, President Jefferson knows that the West is full of strange and dangerous tribes, and worse, monsters.  And in order for settlers to be safe, Lewis & Clark are going to have to tame the wild and weird. 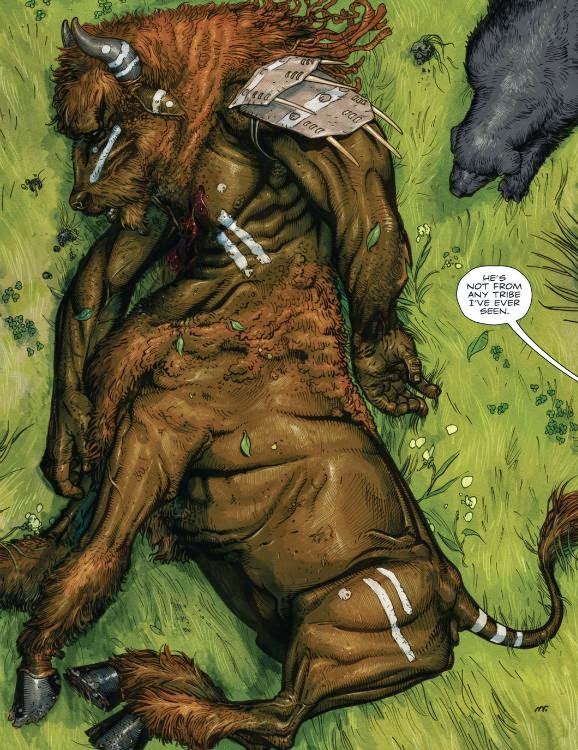 Chris Dingess quickly twists expectations, as the expedition finds a huge arch, not unlike one we’re all familiar with, but this arch is made of branch and leaf, instead of shining metal.  And it gets much worse when they kill a native, who is a strange thing indeed.  A tribe of buffalo headed centaurs?  OK.  As if that wasn’t bad enough, when they reach La Charette to meet up with a guide, they stumble across a terrible plague.  Internal strife and external threat puts everyone on edge.  And the realization that this mission isn’t what everyone signed up for may be too much for some.  That’s when Sacagawea shows up, and boy howdy, I’m curious to see what comes of that.  I’ve enjoyed several ‘Weird Western’ stories and settings, but I don’t think I’ve ever seen one quite like this.  I like the cast of characters and the mysteries and horrors they’ve found.  I’m very interested in where the story is heading and what it’s all going to be about. 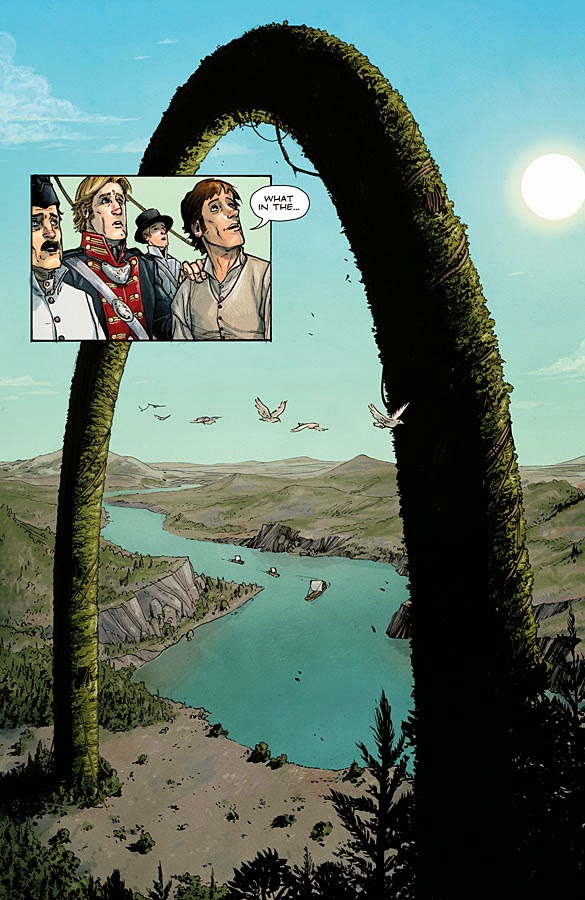 The art in the book is good, occasionally excellent.  The panel work is good, not causing confusion or getting in the way, while remaining dynamic.  And the coloring lends a vividness that is refreshing.  I would almost expect a horror themed story like this to be more drab, or darker.  I like that it’s quite colorful, with much of the horror taking place in the bright light of day. 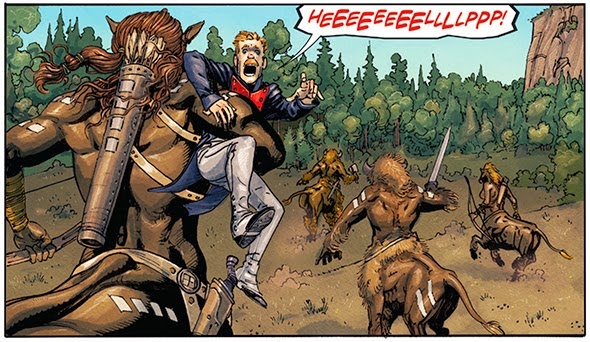 This is another example of Image Comics publishing the kinds of things I’m more interested in reading.  For people who want to try comics, but aren’t interested in super heroes, and don’t want to have to wade through decades of back story, Image is where it’s at.  From sci-fi, to horror, to spy thrillers, they’re producing a fantastic variety of graphic fiction. 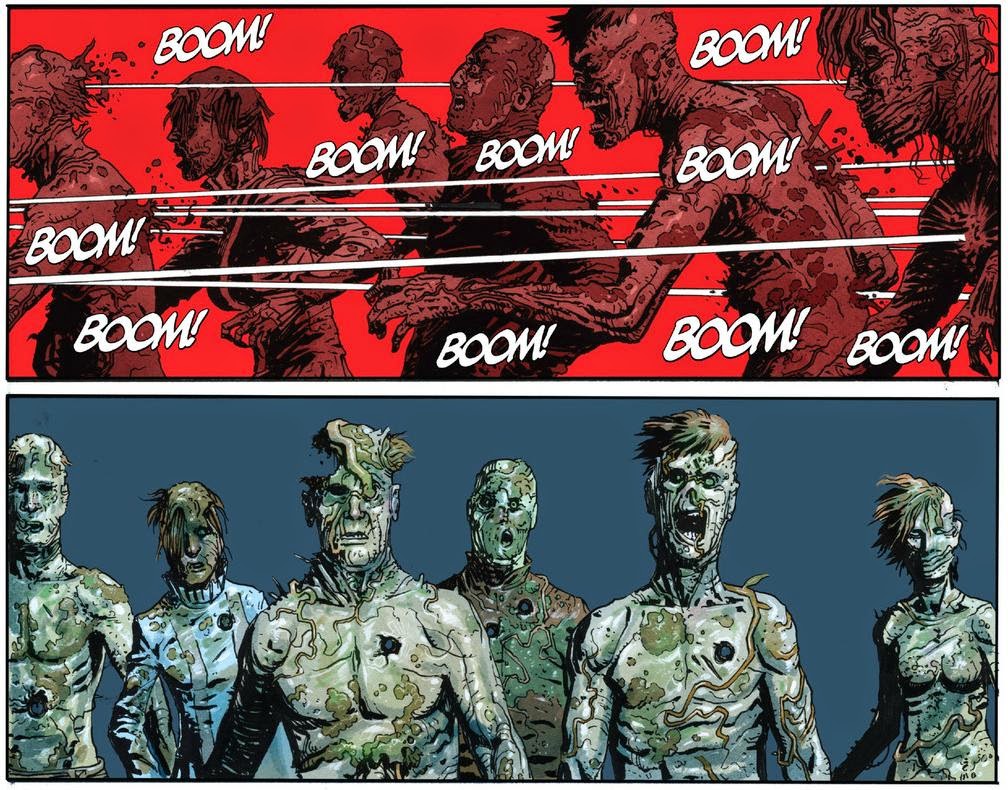 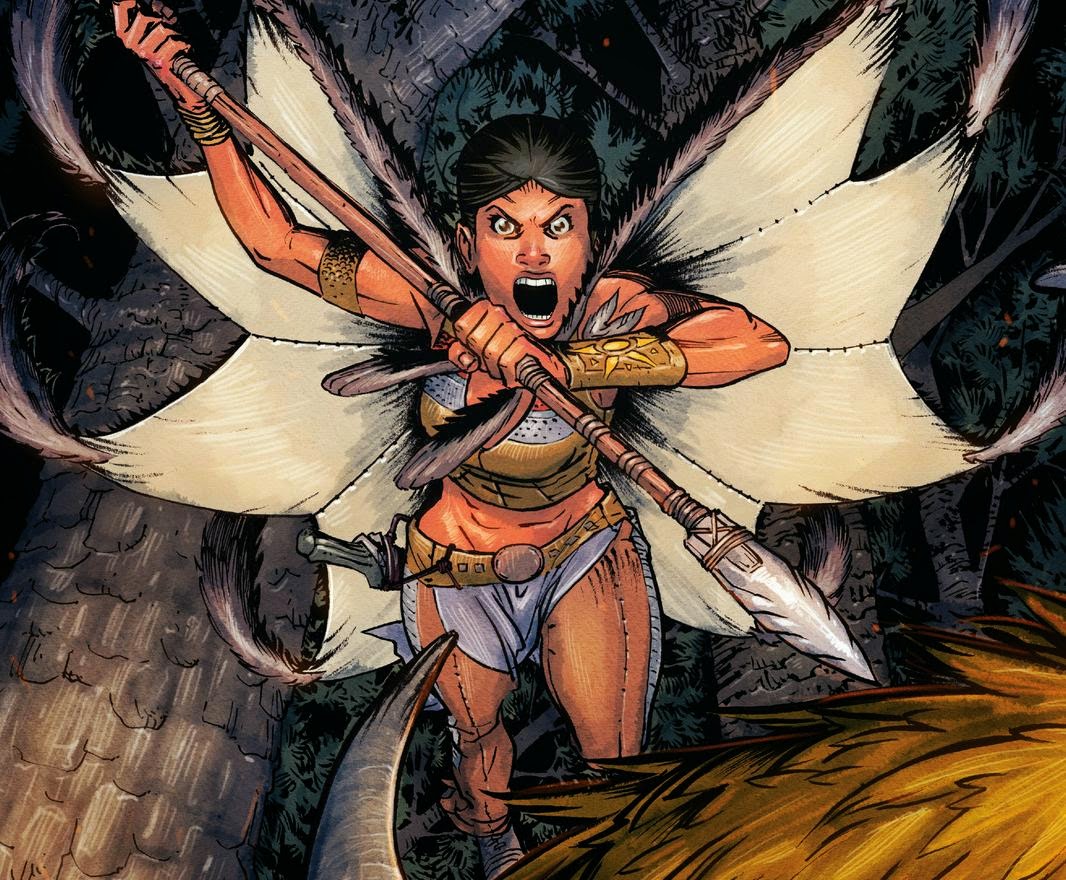 Posted by In The Mouth Of Dorkness at 12:11 PM No comments: 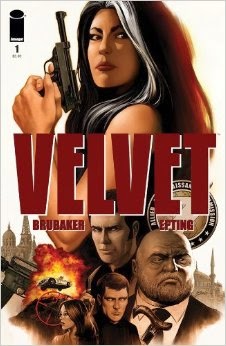 If you need a one sentence synopsis to sell your book, you could do worse than “Imagine that Miss Moneypenny used to be a superspy, and when Bond gets killed, she gets blamed, and has to clear her name no matter how many bodies she leaves in her wake.”  Velvet is one seriously cool character, and as the first volume of the series progresses, you learn more and more about her time as a spy, and the bad opp that put her behind a desk.  Set deep in the heart of the Cold War, with exotic locations and plenty of action, this is a compelling comic, and one of the best things on the market at this time.

Ed Brubaker and Steve Epting, who brought the Cold War to life in Captain America’s Winter Soldier arc, are unchained from Marvel’s generations of canon, able to create new characters to explore spy action where consequences are real.  If a character dies, there is no editing staff insisting that he or she be resurrected six months later.  Nobody is safe in this kind of story, and that’s the best.  Brubaker’s writing is intense and crisp, with plenty of sudden, shocking twists, yet doesn’t feel rushed or confused.  Epting’s art is typically stylish, with solid, but not flashy panel work.  There’s a Film Noir style, which is enhanced by Elizabeth Breitweiser’s awesome color work. 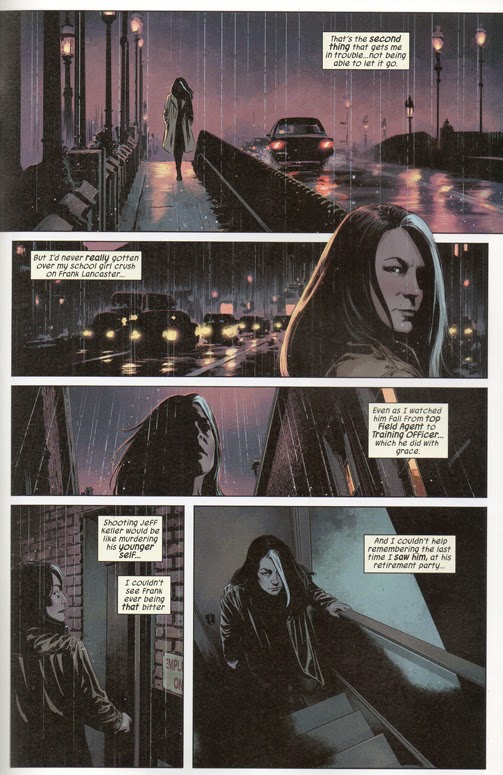 If, like me, you’re just not all that into the caped crusaders and spandex clad heroes, comics like Velvet are an excellent option.  Being a fan of Cold War spy thrillers doesn’t hurt.  Brubaker has quickly become one of my very favorite writers working in the medium, and I can’t wait to find out what he has in store for Velvet in the coming months.  I can’t imagine things will turn out well, but I’m guessing she’ll get plenty of bloody vengeance before it’s over.  It reminds me of why I am digging Image Comics, these days.  While Marvel and DC continue to flounder around with reboots and re-launches, Image is dropping some of the best comics I’ve read one after another.  Sure, they’re putting out stuff I don’t care for, you can’t please everyone, every time.  If you’re willing to read comics, but not interested in super heroes, take a look at Image’s catalog. 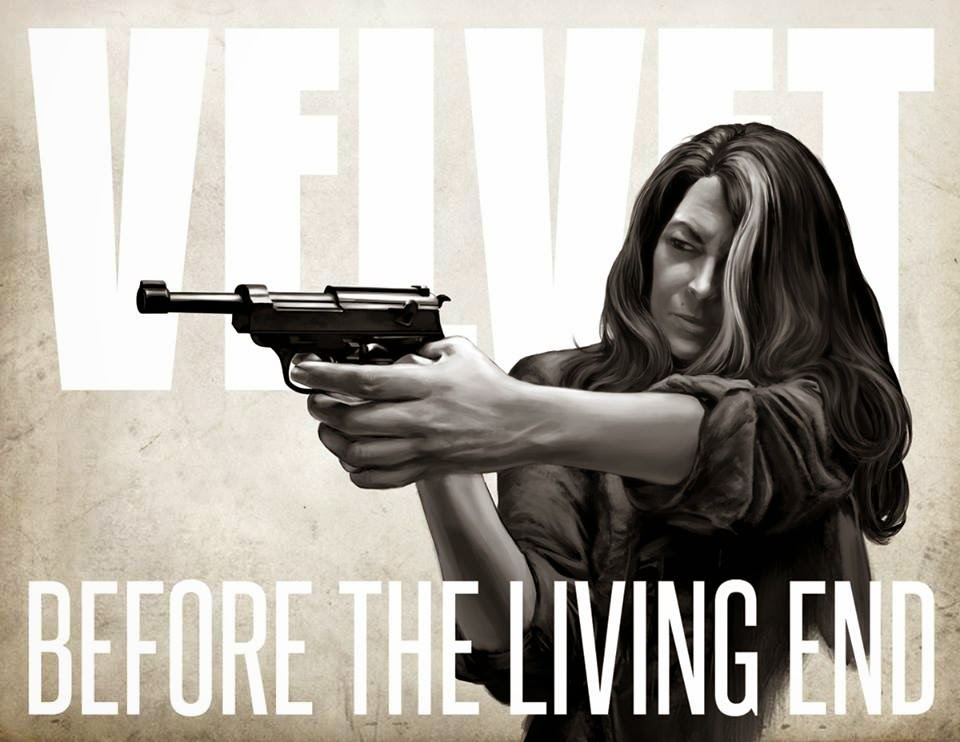 -Matthew J. Constantine
Posted by In The Mouth Of Dorkness at 11:55 AM No comments: 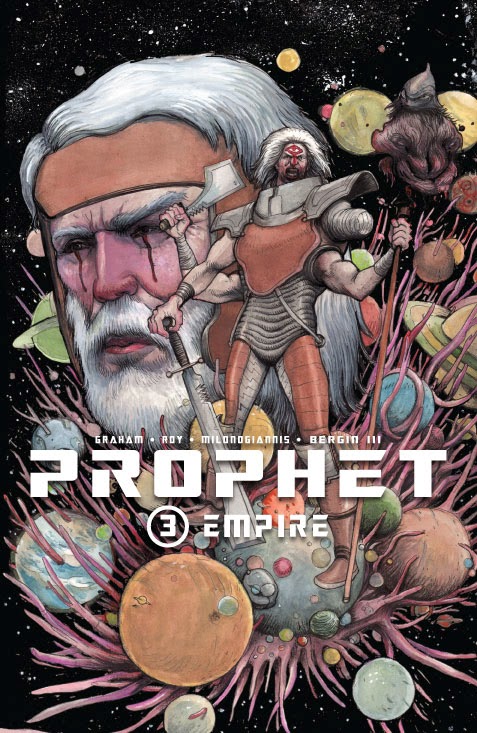 The many threads of the many John Prophets are beginning to weave together into a tapestry of marvelous oddity.  In this, the third volume of this Dune-esque science fiction epic, we witness the liberation of Earth, the waking of weapons, and connections to the past.  Hero Johns and villain Johns, and everything in between. 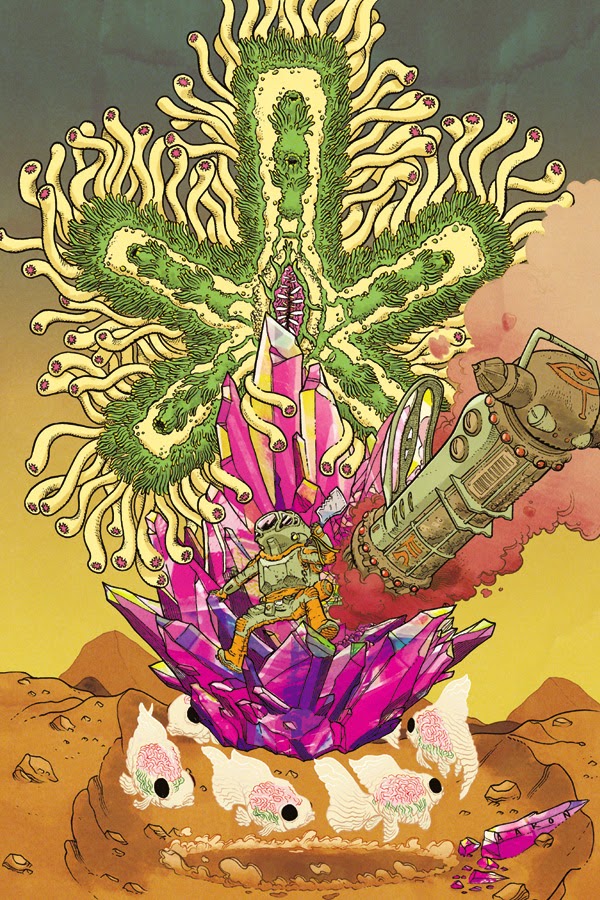 Prophet is a wonderfully off the wall tale, the likes of which you just don’t see every day.  It’s nowhere near as relatable or friendly as Star Wars or Firefly.  It’s nowhere near as tame as Interstellar or Avatar.  It does not help you, and does not care if you get it.  Prophet is.  Perhaps I’m ascribing too much to Brandon Graham and Co.’s work.  But whatever the case, I’m loving this obscure, out there, trippy, freaky story, writ large on the face of a chaotic universe. 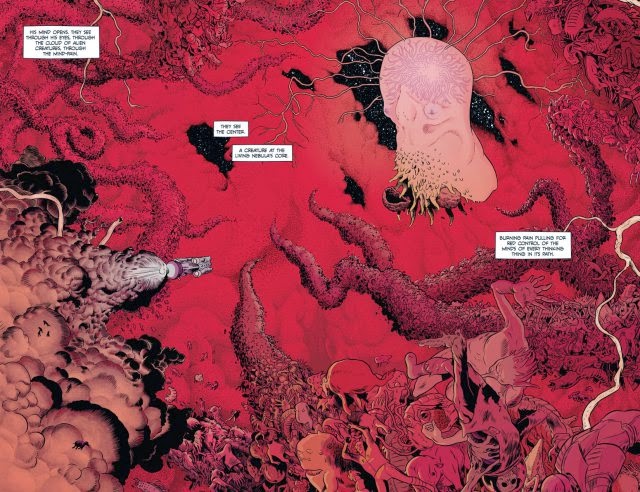 In previous reviews (volume 1, volume 2), I’ve mentioned the art.  It remains.  I’ve mentioned the ‘similarity’ to The Incal, Dune, Metabarons, and the like.  That is all still true.  It is a series that science fiction fans should be reading.  Seek this out.  It’s a punch in the brain, and it’s awesome. 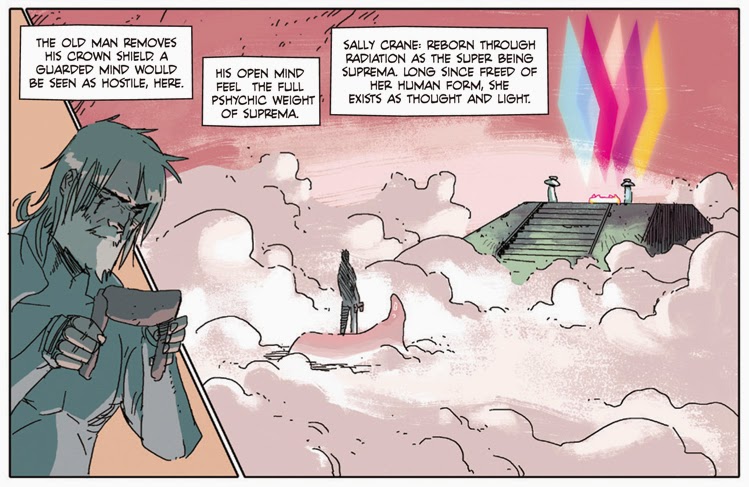 -Matthew J. Constantine
Posted by In The Mouth Of Dorkness at 6:29 PM No comments: