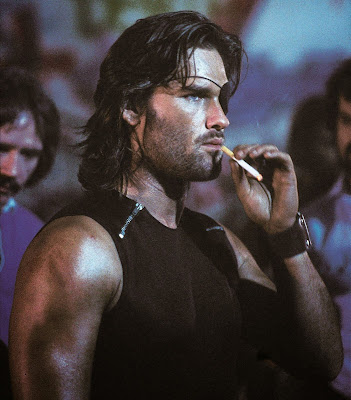 I took it easy this week.  Nothing too exciting or revolutionary was consumed.  The best bits involved John Carpenter and everybody's favorite inmate.  I cranked out one new film from 2013 (too bad it was a meh), and our latest meeting of The Ultimate Justice League of Extraordinary Graphic Novel Book Club was a rip roaring success.  Still, I will have to do much better next week.  (Pssst...since this is going up several days late, I can tell you that next's week's entry is waaaaaaaay better.  Two words - Fantastic Fest!). 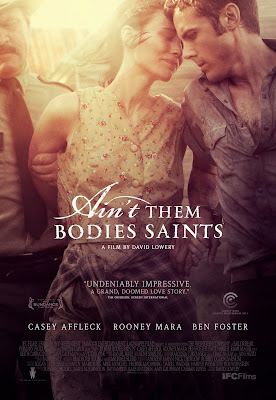 Ain't Them Bodies Saints:  Not quite Bonnie & Clyde or Badlands, this tale of outlaw romance is too one sided to claim kinship with superior films, but director David Lowery certainly seems intent on imposing Terrance Mallick's self-important lingering eye on the characters and setting.  After several years of incarceration, Casey Affleck escapes the state pen in a mad dash to reunite with his wife and daughter.  Rooney Mara hides too much emotion, and the question of her undying love for Affleck is more frustrating than compelling.  If I liked anything about this wannabe Texas Noir, it's the side players.  Ben Foster stretches beyond his usual rage fueled persona, and actually captures a sadsack with his portrayal of Deputy Wheeler, lost in the gaze of the equally lovelorn Mara.  And of course I love Keith Carradine playing a scumbag cowboy of yesteryear.  If the film actually took his point of view than maybe I would have given a damn about the plot. 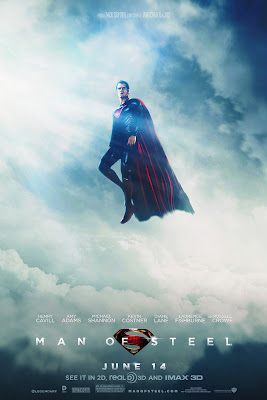 Man of Steel:  There is so much that I love about this film - the birth of Kal-El, the destruction of Krypton, Russell Crowe's badass space daddy, and yes, the third act nonstop devastation of Metropolis.  But there is also so much that I hate about this film - Michael Shannon's screaming Zod, the nonstop shaky cam, and Pa Kent's desperate fear for his alien son.  Still, I was quick to snatch up the blu ray this week and it's looks gorgeous in high definition.  You will believe a man can fly.  Then I watched the Honest Trailer.  Yikes.  "...this is the reboot for you psycho."  The Screen Junkies have a special ability to cut to the quick of Blockbuster Idiocy, and their latest Man of Steel ribbing just might be the most brutally accurate attack yet.  Funny as hell too.  Man of Steel is not garbage, but it's also not The Dark Knight it so desperately want to be - Snyder certainly doesn't understand or appreciate the differences between DC Comics's flagship characters.  Which is not only a shame, but utterly pathetic when you think of how Marvel Studios seems to have cracked the nut of not just their Avengers, but the god damn Rocket Raccoon.  Madness. 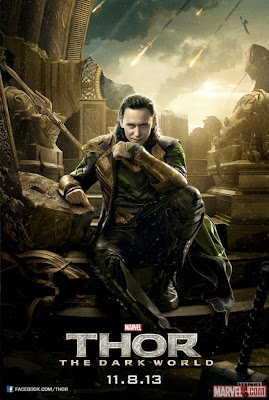 Thor - The Dark World:  Coming off my Man of Steel rewatch, I'm even more impressed with the universe building going on at The House of Ideas.  This God of Thunder sequel certainly doesn't reach the heavens like The Avengers or even Iron Man 3, but I really appreciate the adventurous spirit of this science-fiction fantasy.  Space Ships and Lasers and Elves Oh My!  Marvel Studios doesn't seem interested in elevating the super hero genre, only in establishing it's comic book roots into the multiplexes.  Are the films as good as the funny pages?  Not yet.  But we're well on our way. 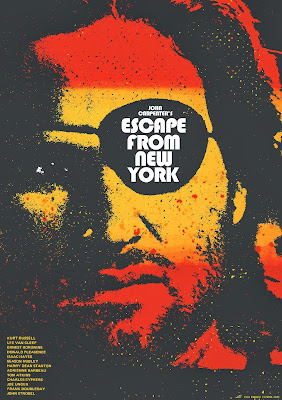 Escape From New York:  "You gonna kill me now, Snake?"  Kurt Russell does Clint Eastwood in yet another faux Western from John Carpenter, and its a masterpiece of 80s machismo.  Escape From New York manages to walk the line of camp and super cool TNT.  It's the 1990s.  America has gone to pot.  Manhattan has been transformed into a maximum security prison to house the very worst of its home grown scum.  Murderers, Rapists, Cab Drivers.  When Air Force One crash lands behind the walls, Lee Van Cleef's warden can think of only one thing to do - send in celebrity outlaw Snake Plissken to take down Isaac Hayes's overlord and retrieve POTUS.  Sure, that makes sense.  Everyone might think he's dead, but Kurt Russell's Snake is very much alive as he dispatches a cadre of freaks - my favorite being the shark toothed Frank Doubleday.  Man,  that dude is scary.  Escape From New York is packed with great supporting players like Harry Dead Stanton, Adrienne Barbeau, Ernest Borgnine, and Donald Pleasance.  None of them get terrible amounts of screen time, but all seem to take great pleasure in chewing the scenery.  "You're the Duke!  You're A Number Onnnnnnnnne!!!!!"  Seriously, if you've been watching movies for more than a decade than hopefully you already know the giddy joys of John Carpenter's Escape From New York.  Gosh, why they attempted to retread this script in LA is beyond me, but I'm ready for a proper sequel. 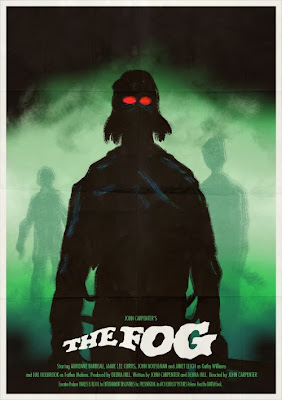 The Fog:  "Something did happen once."  That quote pretty much sums up my feelings for this Carpenter misstep.  I dig the opening campfire spook story, but the actual plot involving pirate ghosts in the mist is real dullsville.  Tom Atkins costars without his mustache and that's probably the first mistake in a string of them.  The other big one being the leading lady split between Adrienne Barbeaux's DJ Mama and Jaime Lee Curtis' mop-topped drifter.  The film never seems happy with its direction, jumping from scene to scene, and providing a kill when the filmmakers have no clue on what to do next.  Dean Cundey's cinematography is typically moody, and you can never hate on a John Carpenter score, but The Fog never finds its footing and none of the actors seem too bothered to be there.  Scream Factory goes all in with the blu ray, but all the special features in the world can't save this snooze. 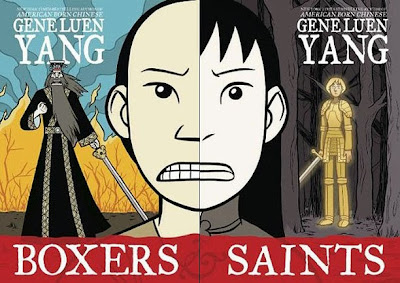 Boxers & Saints by Gene Luen Yang:  Check out Matt's review for a little more depth, but I found this dueling graphic novel to be exceptional.  The first book follows China's Boxer Rebellion from the point of view of young Bao, a child who's fatherly hero worship is wrecked when Pop is horrendously beaten at the hands of "foreign devils."  Under the tutelage of Red Lantern Chu & Master Big Belly, Bao is possessed by the gods of China and leads a revolution against those that would enslave their land and culture.  What begins as a Kung Fu romp quickly turns to stomach churning genocide.  The second book, Saints, explores The Boxer Rebellion from the point of view of young Four-Girl.  A child cursed by her family by simply being alive.  Her quest for Devilhood and familial banishment eventually brings Four-Girl into the not-so-open arms of Christianity as well as the confused spirit of Joan of Arc.  Not the happiest of comic books, I was surprised to discover that everyone in our Graphic Novel Book Club loved the dueling stories...but not for the same reasons.  And as such, Boxers & Saints turned out to be one of our more successful discussions and I would recommend it to anyone looking beyond the capes & spandex of the four color form. 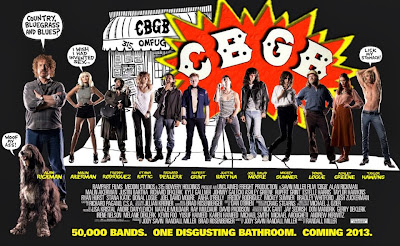 CBGB:  If you loved Randall Miller's Bottle Shock or Noble Son than you'll love this follow up.  The problem is that you didn't love either of those movies, you just thought they were o.k.  So is CBGB.  It's always fun to see Alan Rickman in a starring turn, and his Hilly Krystal is a fun bit of morose enthusiasm.  And I guess its cool to see Malin Akerman as Deborah Harry or Rupert Grint as Cheetah Chrome.  But if Punk music is more than just The Sex Pistols to you than you'll probably role your eyes a bunch during the film's run time.  Painfully slight, but not the worst way to kill 90 minutes. 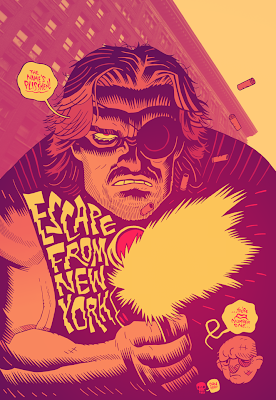