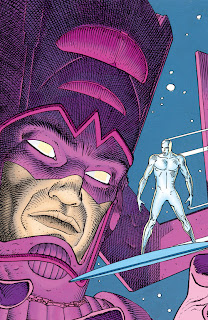 Here’s the thing.  I really like the Silver Surfer.  I do.  I think he’s a really cool and interesting character.  Buuuuut, you see, Stan Lee wrote a good deal of his stories and Stan Lee is, um, a terrible writer.  Like Wonder Woman, The Fantastic Four, Black Panther, Cat Woman, and so many more, the core concept of the character is sound, but the execution is almost universally bad.  So, being a glutton for punishment, I’ve read a good deal of Surfer comics, usually gritting my teeth while thinking about how awesome it should be, and how not very good it is.  That same thing happened while reading this volume.  Famed European comic artist Moebius, one of the key visual storytellers of the 70s, whose work frequently graced the pages of Heavy Metal issues I’d sneak peaks at when I was a boy, is a perfect match for the cosmic nomad, and there are some beautiful panels.  But Stan…Oh, Stan. 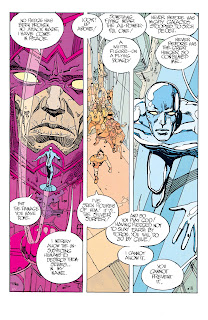 You see, Stan Lee is an important figure in comics.  That can’t really be debated.  But, like August Derleth in Lovecraft circles and George Lucas & Gene Rodenberry in sci-fi circles, his actual ability in the arena is…not so good.  I must admit that his writing in this volume is much better than what he was doing in the 60s.  Though he crams entirely too many words into each panel, without saying much of anything, he thankfully avoids describing what we can plainly see in gratuitous captions (Check out early Surfer, FF, or Spider-man for panels where the character says what he’s doing, the caption describes the action, and the picture shows you what’s happening.  It’s a visual medium, Stan, we know what’s happening because there’s a picture!).  And as bad as the writing in this is, it’s still better than Chris Claremont.  But his flowery, overly dramatic dialog is painfully silly and out of step.  His heavy handed moralizing isn’t even subtle enough for the worst episodes of original Trek (Eeb planista!).  There’s a phenomena friends and I have come to call the ‘Marvel crowd.’  This is the crowd of people who change opinions and moods on a dime.  You can see them in the awful Spiderman movies, in the Fantastic Four films, and even in non-Marvel films like The Dark Knight.  Occasionally I’ll spot a Marvel crowd in film unrelated to comics at all.  But Marvel Comics have got to be the worst perpetrators of this menace, and Stan Lee seems to be their most fervent perpetrator.  A kind of meta-example of this is the relationship between the X-Men and EVERYONE else in the Marvel Universe.  All normal people hate and fear the X-Men, and want to persecute them.  But few people (unless someone manipulates them…which is extremely easy to do) have any problem whatsoever with the Fantastic Four, Spider-man, or any number of other strange heroes.  That doesn’t make any danged sense.  And that’s plagued Silver Surfer all along.  Everyone hates him.  He villages, stops alien invasions, gets cats out of trees, yet everyone hates him…Um…’cause he’s an alien, er something.  No, it’s because Stan can’t write, and he needs characters to be persecuted so he can slap readers across the face with his ‘shouldn’t we be ashamed of ourselves’ self-hating Liberal mentality.  Parable is all about how people are sheep, anyone with power is evil, the Surfer is like Christ, and Galactus is organized religion.  I even agree with his general thoughts about how religious figureheads are generally power hungry and corrupt, and how some people simply want to be told what to do and what to think, so will go out of their way to put themselves in the power of charismatic leaders.  But the rest of it?  Ugh. 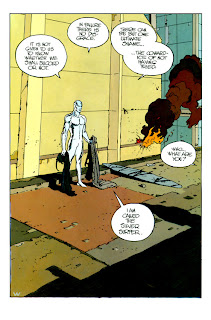 The volume also contains The Enslavers, written by Lee again, with art by Keith Pollard.  This feels more like classic Surfer stuff, with some nice art, but a pretty silly story.  The villain is pretty lame, and like all too many Silver Surfer stories, it centers around Earth.  But I like the art, and I like that at least sometimes, he gets to do stuff in space.  Considering he’s a ‘cosmic’ character, he spends entirely too much time within Earth’s atmosphere.  The Enslavers sort of feels like a send-off for the Surfer.  Though, honestly, I don’t really know what Marvel has done with him over the years.  He seems to pop up randomly, and there doesn’t seem to be much continuity. 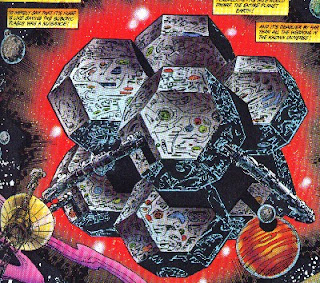 Here’s hoping that someone with some writing talent and someone with artistic talent will be teamed up in the future on a Silver Surfer project that explores some of the potential in the character, without falling back on Stan Lee’s particular brand of problems.  I do think there’s potential for some compelling and contemplative science fiction stories and philosophical meditations.  Somewhere else I said I wanted a Silver Surfer movie to be a 2001 style trippy flick, and that’s kind of what I want from the comic.  Moebius would have been a great artist to have on that, but Lee was the wrong writer. 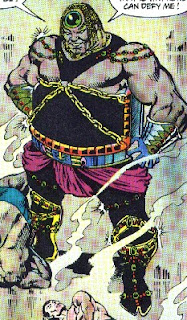 Posted by In The Mouth Of Dorkness at 3:14 PM