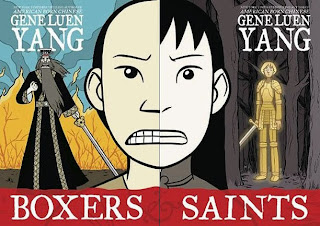 Set during the late 1800s, Boxers chronicles the rise of a peasant revolution.  Bao is a happy young boy who enjoys the opera and idolizes the masked characters and his father.  But his whole world begins to crumble when his father is beaten and broken by ‘foreign devils.’  When a jovial martial artist arrives in the village, Bao finds a way to embrace his love of the heroes of opera.  What follows is part history, part Shaw Bros. fantasy adventure, as the villagers learn to fight, gather around Bao, and head to the foreign tainted Peking.  Fueled by nationalism, racism, and the pains of oppression, the so called Boxers fight back against the soldiers of the outsiders. 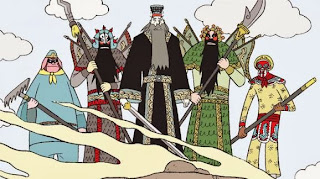 Saints follows Four-Girl, a child raised under a cloud of family tragedy and ill omen, who tries to find herself in a rapidly changing world.  In an attempt to rebel, and to embrace her ‘cursed’ nature, she joins the foreign devil Christians, taking the name Vibiana.  Her journey is different, but she too ends up in Peking when the rebellion comes to its bloody climax.

Each volume explores the protagonist’s relationship with various aspects of religion, tradition, and gods.  Bao and his fellow Boxers are inhabited by the spirits of the heroes of opera, while Four-Girl seeks guidance from some horrible raccoon demon, and then from the spirit of Joan of Arc.  Are these possessions and visions real?  Are they the dreams of youth, or delusion?  Are Bao, Four-Girl, and the rest simply mad from the horrors of their times?  It gives you a lot to think about, and I think a lot of interpretive wiggle room. 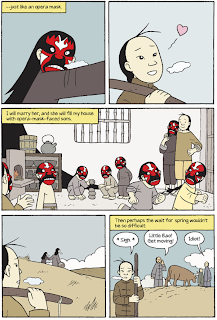 As companion volumes, Boxers and Saints make for a good read, each looking at different aspects of the same historic event.  Each complements and juxtaposes the other.  The colorful palette of Boxers and the muted tones of Saints for example.  And the question of religion, of its use, its dangers, etc. seems to be left open.  All this makes for a compelling read with plenty to think about.  And like the best books, it makes me want to read more.  I’ll certainly be reading Gene Luen Yang’s American Born Chinese.  But I also picked up a book on the Boxer Rebellion, and another on the Taiping Rebellion.  As much of my knowledge of China’s history and culture comes from martial arts movies and Hong Kong melodramas, I figured now would be a good time to read something more scholarly.  It should also help give me more context for enjoying those films. 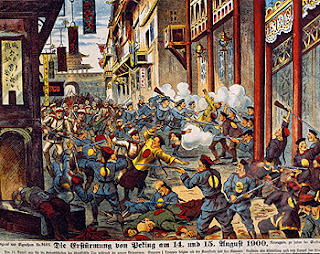 -Matt
Posted by In The Mouth Of Dorkness at 6:03 AM