In 2001, Marvel decided to make a big splash with their books and re-energize a number of titles.  These included New X-Men from Grant Morrison & Frank Quitely, Daredevil from Brian Michael Bendis & Alex Maleev, and Amazing Spider-Man from J. Michael Straczynski & John Romita, Jr.  It was a great time to be reading comics, and, for me, this was the first time since John Byrne was working regularly for them that I took any notice of Marvel comics.  I mean, come on – Grant Morrison did Animal Man and Bendis did Torso, and I loved those books.  How could I not pay attention?

But, for me, the biggest news was that JMS was going to be writing Amazing Spider-Man.  This was huge.  I love Babylon 5, and, for my money, it is the best science fiction television show ever to hit the airwaves.  The evolution of characters, the laying down of story seeds in the first season that payoff two or three or four seasons later, the big ideas coupled with fully realized alien races and political intrigue – JMS kept me excited and wanting more throughout the entire five seasons of this seminal science fiction show.

So when he was hired for Spidey, I was all in. 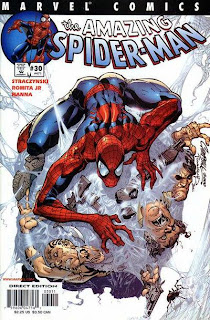 And the first storyline, encompassing issues 30-35 and entitled “Coming Home,” did not disappoint and ended up winning the Eisner award for best serialized story that year.

In interviews, I remember JMS stating he wanted to stay away from the typical Spider-Man villains and create new characters for his run.  And he dropped everyone into the deep end of the pool with the first issue when he introduced Ezekiel.

A successful businessman – something we don’t discover until shortly after we first meet him – Ezekiel knows an awful lot about Spider-Man, including his origin, his powers, and who it is beneath the mask.  Ezekiel also has very similar powers to those of Spidery.  And, to top it all off, he tells Pete that maybe everything he believed about his life as Spider-Man is wrong.

Ezekiel claims that Peter’s transition into Spider-Man isn’t merely a random occurrence.  He asks Peter, as the two of them stand atop the Empire State Building: 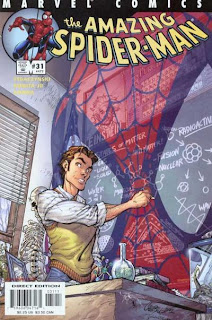 A few days later, Ezekiel finds Peter at his new job, science teacher at his old high school.  He invites Peter for pizza to discuss what he thinks he knows about his powers.  Ezekiel tells Peter about these totemistic forces that used to walk the earth, race memories that still haunt our DNA.  These forces could bridge the gap between humans and other species.  Ezekiel claims that Spider-Man is one of these totemistic forces.  As he explains, you can judge a hero (or man) by his enemies.  One type of hero attracts the same type of enemy, and in the case of Spidey, he’s attracted a lot of totemistic pretenders – Doctor Octopus, the Vulture, the Rhino, the Lizard, and the Scorpion, to name a few of his rogues.

After their pizza, Ezekiel invites Peter to his office building.  He offers Peter sanctuary in a specially built panic room where he can hide from the evil that is coming to hunt him down.  Peter declines, worried that whoever may be after him would put innocents in danger in order to draw him out.  And, having battled numerous enemies through the years as Spider-Man, he feels no need to run and hide.  He’s done this before.  He will do it again.  And he always comes out on top.

AN ASIDE:
I loved this new perspective JMS took with regard to Spider-Man’s powers and origin.  There was an outcry from loyal Spidey fans who denigrated such a reworking of Peter Parker’s story – and many posited a strong argument that this new idea took away the strength of the character, i.e. a forlorn teenager accidentally endowed with great power who must come to terms with his new reality and realize that with such power comes great responsibility.  The randomness of the spider bite plays into this depiction of the character very strongly, and I can understand how some might perceive this as undermining the character.  But, for me, I always took Ezekiel’s story with a heavy grain of salt, intrigued by this notion but content to believe it was only a possibility and nothing more.

The evil coming to hunt down and feed on Spider-Man is the other major character JMS introduces in this first story arc, Morlun.  A vampiric creature who feeds on the life-force of those who have totemistic powers, Morlun believes, as Ezekiel does, that Spider-Man is one of these totemistic forces.  It has been a long time, possibly centuries, since Morlun fed on a pure totemistic force.  So he is determined to capture Spider-Man.  And he is a badass.  With inhuman strength on a level that allows him to effortlessly shake off Spider-Man’s strongest punches, unyielding stamina, and the ability to track his prey anywhere once he’s come in to contact with them, Morlun does not stop for anything.  This is something Spidey learns very quickly, when Morlun uses Spider-Man as a rag doll in their initial confrontation. 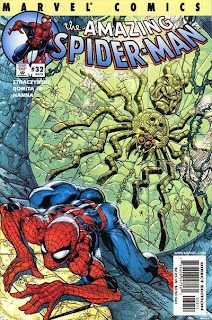 Worn down and fearing for his life, Peter goes back to Ezekiel.  He is ready to take the sanctuary now.  But it is too late.  Morlun has touched Peter.  He can track him anywhere, sensing him even within a full-proof hideaway such as Ezekiel constructed.  Sanctuary is no longer an option.

It is at this point, that things look bleakest for our hero.

To read more of Chris’s thoughts or to check out his short prose and comic work, go to www.warrior27.com, the online home for the comics/prose anthology, Warrior27, created by Chris and by Dan Fleming – with contributions from Matthew J. Constantine (half of In the Mouth of Dorkness), among others.
Posted by In The Mouth Of Dorkness at 3:00 PM