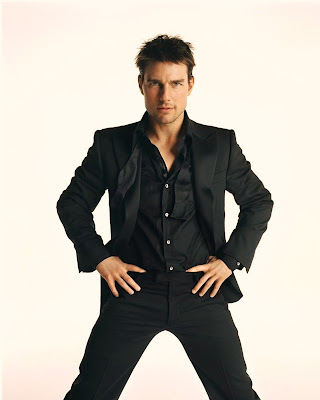 Honestly, this week has been kind of a blur.  I started out with the intention of turning it into a mini-In Defense of Tom Cruise marathon, I soon realized that it was going to be another week filled with random distraction.  San Diego Comic Con is nearly upon me.  I've been waiting a long, long, long time to reach Dork Mecca and every fiber of my being is currently consumed with anxious, unbridled enthusiasm for the upcoming Con Madness.  My wife and I leave Wednesday morning and I'm not sure how much of a presence I'm going to be later in the week.  After the con we're spending a little more time in California, visiting all the typical sites.  I'm bringing my computer (and my iPhone) so I won't be totally invisible, just a little toned down.

I will get back to the Tom Cruising.  I need to bask in the glory of Collateral, Interview With A Vampire, Knight and Day, Valkyrie, The Last Samurai, Magnolia, Vanilla Sky, and Tropic Thunder.  That Week in Dork will be a lot of fun.  So, To Be Continued... with that.

MOVIES OF THE WEEK! 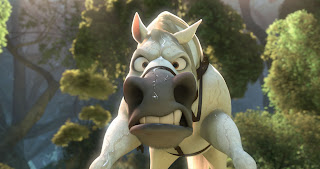 Tangled:  Cute and fluffy and a definite step up from the last Disney animated film, Tangled still feels a bit Dreamworks/Pixar-lite but who cares when yer chuckling along at the rivalry between Chuck and the persnickety Maximus or the schizo emotions of runaway Rapunzel. But I doubt these tunes will stick around in my noggin and I probably could have done without them.  Fun, but I'm not going to remember this film next week let alone a decade from now. 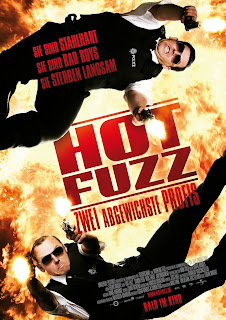 Hot Fuzz:  "Yarp." The Simon Pegg/Nick Frost/Edgar Wright follow-up to Shaun of the Dead could have been heaps of disappointment, but Hot Fuzz delivers on the bizarre, properly British & skewered humor, and ups the ante as far as whacko characters are concerned. A smattering of Michael Bay, a dash of 80s slasher, and a good heap of Wicker Man Love keep the geeks happy.  But for me it's Pegg's unstoppable Super Cop that elevates the cheeky proceedings. A love letter that should garner its own batch of pen pals. 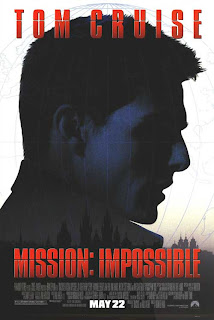 Mission Impossible:  With the exception of the pre-credits sequence, this cinematic take on Mission Impossible feels absolutely nothing like the original 60s television series, but despite defaming the character of Jim Phelps and refitting the saga to Blockbuster status this flick is still loads of fun under the precise hand of Brian DePalma and his cutesy action set pieces. Tom Cruise, his cocksure bravado, the team building, and that utterly brilliant Chemical Brothers theme retooling. Plenty too enjoy. 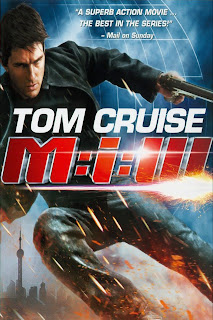 Mission Impossible III:  After the ridiculous John Wooieness of Part 2, JJ Abrams breathes much needed life into the Mission Impossible franchise despite also injecting it with some completely unnecessary romance and some awkward sad teacher/father Keri Russel moodiness. Tom Cruise delivers the typical action-face intensity and Philip Seymour Hoffman is sneeringly scary as IMF's first good screen villain. And the bridge attack set piece is sincerely badass. BOOM! Cruise Meet Car! Again, I would have dumped Michelle Monaghan but M:I:III might be the best one yet.  And I can't wait to see the Brad Bird Tom Cruse Karate Kick fourth installment. 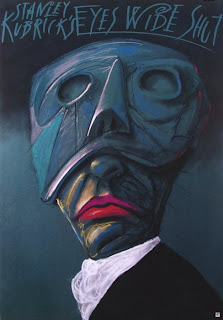 Eyes Wide Shut:  "Please don't despise me." Stanley Kubrick's final film might also be his most haunting. What starts off as this slightly surreal relationship melodrama slowly burns into this possibly mad, sexual conspiracy with Tom Cruise struggling to decipher the world he's slipped inside. Strange, beautiful, and damn creepy. Eyes Wide Shut is a film impossible to dismiss and I often find myself drifting back to its mysterious grip more so than 2001 or The Shining or Dr. Strangelove.  And that score.  Holy Cowcrap, some of those piano pangs nearly messed my drawers. 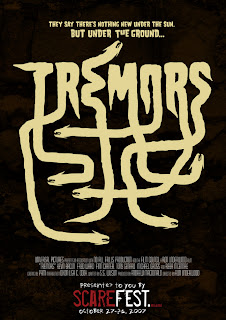 Tremors:  With each viewing my love for Tremors grows and grows and at this point that love is all consuming and I would argue that Tremors is one of the all time great modern monster films. Kevin Bacon & Fred Ward are a fantastic not-so-odd couple and I wish fanboyishly that there was a whole franchise of films about their characters (that not necessarily involve the graboids). And the film is perfectly PG-13 gross with exploding burrowers, mutilated sheep, and scooped out man-noggins! Tremors is just a wonderful big budget Corman flick. 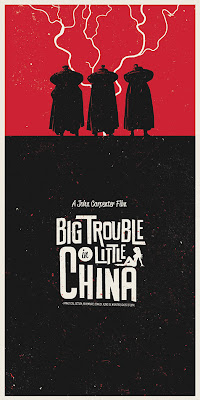 Big Trouble In Little China:  "It's All In The Reflexes." When I think Kurt Russell Cool I think of Jack Burton...my mind should probably jump to Snake Plisken or RJ MacReady, but I gotta go with the blowhard fool hero of Big Trouble in Little China. He says all the wrong things, he doesn't know what the hell is going on, and 2 out of 3 times his aim is way off, BUT! He and his "sidekick" Dennis Dun shook the pillars of heaven, no horseshit. The Thing might be John Carpenter's masterpiece, but my go-to flick for the instant cheer-up is Big Trouble in Little China and its hodgepodge kung fu narrative pleases all the real dorks in the audience. 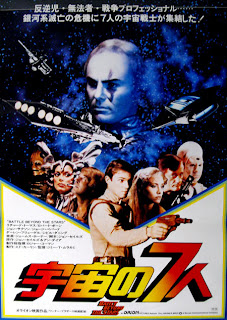 Battle Beyond The Stars:  A long time ago in a backlot far far away, Roger Corman turned his penny-pinching sights upon Star Wars and delivered this delightfully goofy space opera comprised of fun model work and heavenly map paintings. The plot is pure Seven Samurai with John Boy Richard Thomas gathering the most cut-throat mercenaries of the known universe to protect his homeworld from the hamheaded John Saxon. Robert Vaughn is bad man Gelt, George Peppard is the belt-whisky dispensing Space Cowboy, and Sybil Danning is the almost clothed St. Exmin, Warrior Queen. Together they will spit crazy dialog about kissing and hotdogs and you Corman Nuts out there will eat it up. Lots and lots of fun. 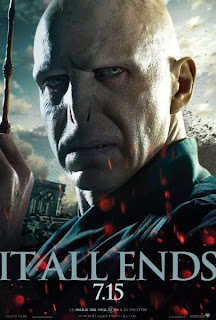 Harry Potter and The Deathly Hallows Part 2:  A hard film to discuss without unleashing an array of spoilers. The franchise will obviously go down as one of the great cinematic sagas and having just watched all eight films in the last couple of months I can honestly say that they are loads of fun. But the last film, or the climax of the last film left me feeling incredibly flat. There are some fine moments. The opening scene between Harry and Warick Davis is fantastic. And Snape's story is wonderful. But the action is soft with a score that's far too muted. And much of the climax is handled too quickly and often offscreen. Found it frustrating. And, that epilogue was groan inducing. 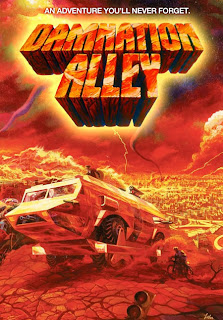 Damnation Alley:  After a nearly overlong pre-nuked intro, Damnation Alley blows its wad too early with a great giant scorpion vs. motorcycled Jan Michael Vincent battle. The rest of the film meanders about like the geektastic Landmaster (imagine a van that Jesus would have driven if Jesus had driven vans), and your enjoyment of the film will depend on how much you love the aforementioned Vincent, the strangely mustached George Peppard, and the gregarious Paul Winfield. The film also has some nasty metalic cockroaches, crazed diner hillbillies, and lots and lots of technicolor storms but you'll be craving more mondo as the running time ticks away. Fun, but maybe too serious. 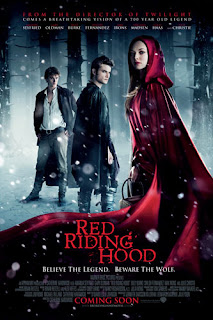 Red Riding Hood:  Look, any self respecting film fan knows from the very first trailer that this movie is most likely going to suck. So why would any self respecting film fan watch this film? Well, it's got a pretty great supporting cast in Gary Oldman (Tiptoes, people, Tiptoes), Billy Burke, Virginia Madsen, Lukas Haas, Michael Hogan, and Julie Christie. And none of them should be in this film. They should be cashing paychecks elsewhere. But here they are. Twilighting it up with lifeless Amanda Seyfried and the even more corpse like boy duo of Shiloh Fernandez and Max Irons. But the real problem is that it's a snoozefest.  Ghastly, and a real contender for The Worst Film of 2011. 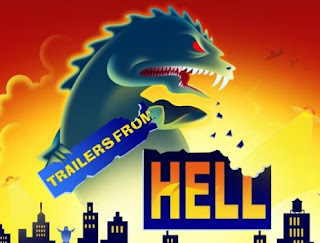 Trailers From Hell Volume 1:  Thanks to my fellow Blogger, The Daily Grindhouse I am now the proud owner of both volumes of Trailers From Hell.  I don't know if you hipcats out there in Internetland are aware of Joe Dante's brilliant website, but as my wife and I were cranking through Commentary-laced trailers for Blood & Roses, Phantom of the Paradise, Curse of the Werewolf I could feel myself falling deeper and deeper in love with cinema.  That sounds so silly.  But it's true.  Listening to movie masters like John Landis and Guillermo Del Toro go on about their favorite flicks is infectious.  You can't help but get sucked in by their joy.  It's philosophical cinema crack.  If you've got an hour watch the below interview with Dante on This Week in Horror and suck up some love.