One of the best things about J. Michael Straczynski’s run on Amazing Spider-Man (at least up to the point I stopped reading, which was when JRJr left the book and Mike Deodato came on as artist) was his characterization of Peter Parker. JMS had a firm hold on what makes this character tick.  Despite being older, Peter is still a person who takes very seriously his responsibility to his family (Aunt May and, though she is gone at this point, Mary Jane) as well as his responsibility, as Spider-Man, to the populace at large.  This does not mean his exploits as Spider-Man are not nerve-wracking.  This is why Spidey has always been a wise-cracker, spewing ridiculous jokes to cover up the fear he feels. It’s a common defense mechanism and one that has been a part of this character from the start.  And JMS’s dialogue smoothly fits into this aspect of the character.

JMS also has Peter moving forward in his civilian life, having him become a science teacher at his old high school, as another way for him to give back to the community.  This is a natural extension of the Spider-Man template set forth by Stan Lee and Steve Ditko back in the early sixties where they had him graduate high school, move on to college, and have evolving relationships with the likes of Betty Brant and Gwen Stacy. Again, it fits the character and is a nice way of “showing” readers who Peter Parker/Spider-Man is rather than telling us through some dull expository caption boxes.  It’s a subtle bit of storytelling that too few writers in comics miss out on, even today. 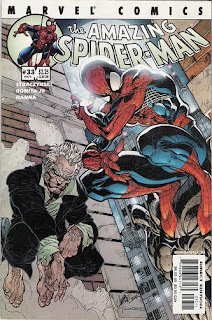 The pacing of this story is also excellent.  There’s an ebb and flow to the narrative that allows readers to enjoy the story and experience the emotional crescendos when they arrive.  One of the best bits of writing advice I’ve gotten came from the DVD commentary by JMS for the final episode of season one of Babylon 5.  He discussed how one should have a quiet moment prior to a major disruption in the narrative – whether it be an emotional disruption or an alien attack or whatever – in order to make that emotional instance resonate with the audience.  And JMS deftly weaves the quiet moments with the “big” ones in this storyline.

Straczynski also sets things up nicely.  He doesn’t have any resolutions come out of left field.  The way Spider-Man defeats Morlun is reached through a natural progression of events, none of which feels forced or hackneyed.  The way Morlun goes on about feeding on a pure totemistic host, and Ezekiel’s surprise arrival that catches the villain off-guard and bloodies his nose – offering Peter an opportunity to study what manner of creature Morlun is – all make sense and feel like the events they are (the villain monologuing, Ezekiel helping Peter) before you realize that they have secondary consequences (the opportunity for Peter to survive this primal force).  It’s wonderful storytelling. 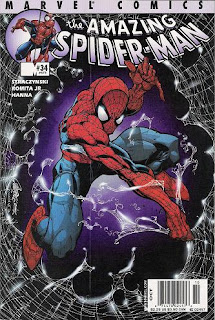 And that brings me to another aspect JMS brought to his initial storyline.  He incorporated Peter’s scientific background when he had Peter take Morlun’s blood and analyze it for a possible way of defeating him.  This is something I have rarely seen utilized in Spider-Man comics.  It was refreshing.  This has always been a cornerstone of the character, and yet it is hardly used within the stories.  Peter’s webs were originally created by him, a scientific breakthrough that he tried to sell to some scientists way back in issue # 18 – a deal that fell through when they discovered the webs dissolved in minutes.

Yeah, editors have made his webs organic – actually an extension of Peter and emanating from his wrists – and I can’t say where the “continuity” stands on this aspect right now, and I’d rather not think about that.  Ugh.

Bringing this aspect back into the book, accentuated by Peter’s decision to become a science teacher at his former high school, was something I greatly appreciated.

And John Romita, Jr’s artwork has never looked as good, in my opinion.  He draws a lithe, ballet-like Spider-Man who is wiry and able to contort his body in a manner reminiscent of a spider and, again, a body type that hearkens back to Steve Ditko’s seminal work.

AN HISTORICAL NOTE:  Initially, Jack Kirby was tapped to draw Spider-Man and he finished five pages of an initial story.  But Stan Lee discarded that and chose to have Ditko draw the book.  He obviously made the right choice.  I don’t know the reasoning, but it seems to me that Kirby’s blocky style really would not fit with the character of Peter Parker – a teenage bookworm with a slight physical frame – whereas Ditko’s lithe artwork was a perfect match for the young hero.

JRJr knows how to draw comics, especially action-packed ones like Spider-Man.  And he does not disappoint here.  When Spidey first faces Morlun, the double-page spread we get from JRJr is fantastic, a whirlwind of these two larger-than-life characters pummeling each other.  It’s a collage of images without panel borders that gets across the frenetic pace of the battle.  It really is a masterfully drawn spread that showcases the unique properties of comics storytelling. 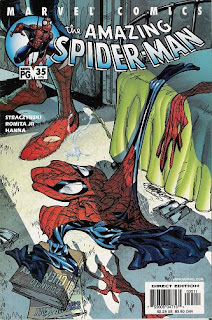 But, though this may not be his strong suit, JRJr can also evoke emotion from the quieter moments of the story.  It’s these moments that help punctuate the action and give it the emotional tenor necessary in a story like this.  Thankfully, JRJr is not afraid to let these softer moments breathe within the larger narrative.  He understands, better than a lot of artists, how to tell a comic story effectively and give readers a full and satisfying experience.  Having a veteran of his stature, who can also hit deadlines, on this book with JMS was a good move on Marvel’s part. It really elevated the first half of Straczynski’s tenure as writer on Amazing Spider-Man and is a major reason why this first storyline won the 2002 Eisner award for best serialized story.

And finally – JMS went there.  He finally had Aunt May discover that her nephew is Spider-Man.  And the way JMS handled that was brilliant.

But that’s best saved for another time.

To read more of Chris’s thoughts or to check out his short prose and comic work, go to www.warrior27.com, the online home for the comics/prose anthology, Warrior27, created by Chris and by Dan Fleming – with contributions from Matthew J. Constantine (half of In the Mouth of Dorkness), among others.
Posted by In The Mouth Of Dorkness at 7:57 AM