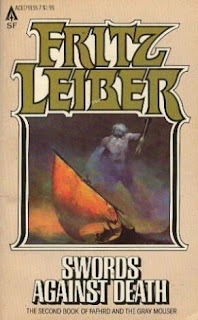 Fantasy isn’t my genre of choice.  I’m a Science Fiction fan.  Even when it’s mostly a matter of aesthetics, like Edgar Rice Burroughs’s Mars books, for example.  I prefer laser guns and repulsor beams to spells and magic carpets.  Yet, there are plenty of exceptions.  Robert E. Howard’s Conan is the obvious.  I can’t get enough of those stories.  And like many lonely, sad teenage boys, I read Michael Moorcock’s Elric with great eagerness (though I preferred Corum).  And then there’s Fafhrd and the Gray Mouser.  They’re something else.

Contemporary Fantasy literature tends to be descended from two major figures in the genre, J.R.R. Tolkien and Robert E. Howard. There were others, of course, but those two represent two of the major themes and styles.  Tolkien’s side of the spectrum is High Fantasy, with lots of magic, destiny, mysticism, and Medievalism.  Howard’s is more Low Fantasy, focusing on Nietzschean individualism, earthiness, and Antediluvianism.  Yet, those two ends of the spectrum are not the final words on the genre.  There are other voices that have done a great deal to influence writers over the decades.  And Fritz Leiber is up there at the top of the list.  Reading the Fafhrd & the Gray Mouser stories, you can’t help but feel like you’re entering a familiar world, even though things are very weird.  Dungeons & Dragons, deeply rooted in Tolkien though it is, was obviously trying to reach for something from Leiber.  In spite of the 30s/40s origin of the characters, the feel the stories elicit is of those wonderful 70s paperback covers.  There’s a pulpiness, sure.  But there’s also wistful nostalgia, bitterness, and hints of psychedelia, that makes it feel far more modern.

“Swords Against Death” is the second collection of Fafhrd & The Gray Mouser stories.  Leiber went back and arranged the stories into chronological order, and fleshed some things out in the 60s.  So in this volume, the two heroes (?) are fast friends, well acquainted with each other, and building something of a reputation.  Over the course of the stories, they achieve some victories, finally put to rest some ghosts, and gain some weird patrons.  They also explore the world enough for you to get a sense that Nehwon is far stranger place than expected.  Lankhmar, the city where most of the stories are based, is a kind of fantasy, urban archetype.  All the seedy, degenerate, corrupt, and exciting things you’d expect in a medieval or ancient metropolis are present and thriving.  But leaving that city, the world around is strange and fractured, wild and weird.

For Fantasy fans, Leiber’s stories are must read classics.  For fans of tabletop RPGs, especially games like D&D or Rolemaster, these tales are an absolute must.  But for folks who simply enjoy well told tales, these stories are also quite good.  Fafhrd and the Gray Mouser are a great odd couple team.  Fritz Leiber is a solid writer, and more ‘Literary’ than a lot of his contemporaries, who manages to inject a good deal of humor along with a lot of sadness in to his adventure stories.


-Matthew J. Constantine
Posted by In The Mouth Of Dorkness at 7:00 AM